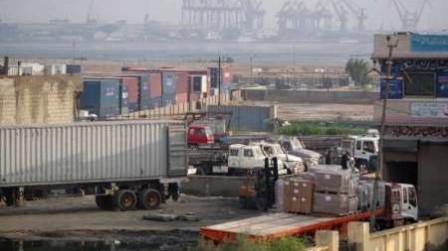 Pakistan has allowed India to sell its products to Afghanistan and up to Central Asia via Pakistani seaports. PHOTO: REUTERS

ISLAMABAD: Pakistan has allowed India to sell its products to Afghanistan and up to Central Asia via Pakistani seaports, reveals the commerce secretary. But experts fear that the decision may allow New Delhi to outpace Islamabad in its industrial exports to Kabul, which is a gateway to the land-locked Central Asia.

In an interview with The Express Tribune, Commerce Secretary Zafar Mahmood said that under the Pak-Afghan Transit Trade Agreement, Afghanistan can import Indian products through the sea route.

He said the facility was already available but now Afghanistan’s trucks would be allowed to load these products directly from the seaports.

Zafar Mahmood was speaking for the first time after Islamabad and Kabul signed on Sunday a new transit trade treaty in the presence of US Secretary of State Hilary Clinton. It is believed that the US pressured Pakistan into giving trade concessions to Afghanistan.

Naeem Bukhari, an expert in trade affairs, said that India got the edge by virtue of the new agreement, as its industrial hub was in Mumbai and it would export its goods to Afghanistan, which is a gateway to the Central Asia, via Pakistani ports. He said India now will have formal trade with Afghanistan and Central Asia and it would outpace Pakistan’s industrial exports to these countries.

The commerce secretary said that India would not be allowed to sell its products to Afghanistan via the Wagha border till the normalisation of bilateral relations. In Bukhari’s opinion, by not allowing India to use the Wagha border Pakistan only secured its perishable exports to Afghanistan. He added that Islamabad ceded ground to New Delhi by extending it sea to land route for its industrial exports to Kabul.

The secretary said that the agreement was a win-win situation for both the countries. “Pakistan would be able to effectively check smuggling and Afghan truckers would get a boost on top of having opportunity of trading with India”.

He said still it was not a formal agreement but a record note of decisions, which were taken in the meeting. “It has more moral value than a legal status. However, it ends the process of negotiations.”

He said keeping in mind the broader principles agreed upon between the two states the details will be incorporated, which would be ratified by the cabinet.  He said the final agreement would be signed soon.

Zafar Mahmood said that the major achievement was that all Afghanistan-bound imports on Karachi port will only be cleared after taking bank guarantees equivalent to the import duties on the imported items from the importer or his clearing agent. He said these guarantees would be refunded only after Pakistan satisfied itself that the consignment had reached its destination.  He said in case of doubt Pakistan could forfeit the financial guarantees.