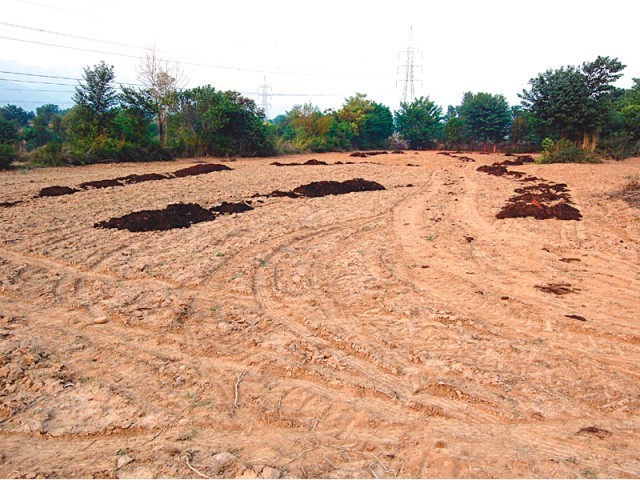 The land is Malpur is still not under CDA’s control, claim the locals. PHOTO: MUHAMMAD JAVAID

The land grabbers, supposedly ousted by the Capital Development Authority (CDA) on the Supreme Court’s orders, are back in Malpur village. They have once again started cultivation on the public land that lies in the Zone-III of the capital city.

The apex court had directed CDA earlier to retrieve the possession of 20,000 acres of public land, including 80 kanals of land in Malpur village, from the occupation of land grabbers. Claiming to have partly fulfilled these orders, the chairperson of the civic agency recently told a parliamentary committee that CDA had retrieved 17,000 acres of land. This included the Malpur village.

However, the residents of the area have a different story to tell. The locals told The Express Tribune that the influential land grabbers had started levelling the uneven pieces of land, after removing the shrubs, to make it suitable for cultivation.

Moreover, the vice-chancellor of Quaid-i-Azam University said that some 13 illegally built villages were located inside the land of the university and CDA did not take any appropriate action to relocate them.

CDA Spokesperson Ramzan Sajid denied these reports, saying that the retrieved land was still under their control and CDA had started plantation of trees in the area. “There are check posts set up by CDA to keep an eye on encroachments,” he said.

A three-member bench of the Supreme Court took this case up for hearing a few months back on a letter written by Pakistan Tehrik-i-Insaf Chairperson Imran Khan alleging that Leader of House in Senate Nayyar Hussain Bokhari was one of the encroachers in the village. The Supreme Court had ordered CDA to take its land back and submit a fortnightly report on the recovery process.