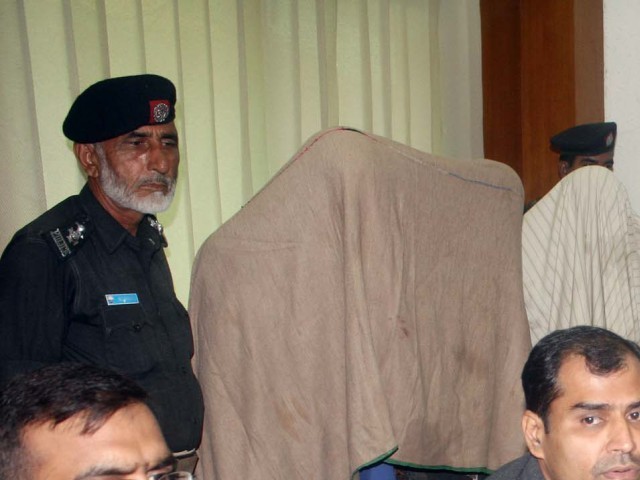 He has also been involved in over a dozen target killings, including those of his own accomplices, Naseer and Wajahat. PHOTO: PPI

Law enforcement agencies said that they have apprehended 9 suspects, including an alleged target killer, in separate raids conducted in the city on Tuesday.

An alleged target killer, Raheel, was arrested during a joint raid conducted by the police and rangers in Surjani Town. The law enforcers also recovered two Kalashnikovs and a TT pistol from his possession. According to the police, Raheel is affiliated with a political party and is also a part of the drug and land mafia.

He has also been involved in over a dozen target killings, including those of his own accomplices, Naseer and Wajahat.

In another raid, Saeedabad police arrested a bandit after an encounter in Baldia. Two bandits were looting people in Gulshan-e-Mazdoor. The culprits opened fire at the police and wounded a police constable, Siddiq. The police retaliated by firing at them and wounded one of the bandits, Arshad Baloch, and took him into their custody, but the other bandit managed to escape.

At least four suspects were taken into custody in a third raid conducted by the rangers in Landhi 89 and Mohabbat Nagar. According to unconfirmed reports, these raids were conducted on a tip-off by arrested suspects.

A policeman and his companions were arrested after a brief encounter near Tahir Villa Chowrangi. According to the police, the suspects were looting passers-by at gunpoint and caught red-handed. A brief gunfight ensued after which the suspects were arrested. The transgressing policeman has been identified as Kashif Raza, and his accomplices have been identified as Ashfaq Shah and Sarwar Lashari. Three TT pistols and looted valuables were recovered from their possession.