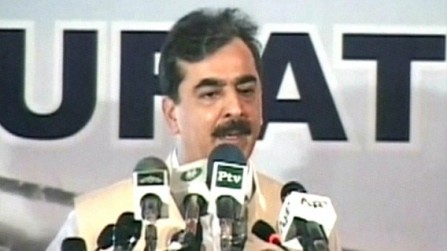 The prime minister insists the government will complete its tenure

KASUR: There will be no mid-term general elections, Prime Minister Yousaf Raza Gilani stated categorically on Saturday, asserting that any disqualification of legislators would simply be followed by by-elections, as per procedure.

Rubbishing rumours that the current situation, sparked by the fake degree saga, could cut short the government’s tenure, Gilani, said that such wishes would not materialise. The prime minister was talking to the media after inaugurating a rental power plant with a generation capacity of 225 MW in Baloki, Kasur district.

He stressed that the PPP government was following the constitution and hence it would complete its constitutional five-year term.

The prime minister also said that he would soon meet the Higher Education Commission (HEC) Chairman Javed Leghari, while scotching reports that Leghari’s brother was being victimised to manipulate the degree-verification process. The Pakistan Peoples Party (PPP), said the prime minister, did not believe in politics of violence or victimisation, and that is why, he claimed, there was  not a single political prisoner at the moment.

The prime minister said that he was not defending anyone on the fake degree issue, adding that he, “called the education minister on the issue as the government wants the matter to be solved quickly.”

To a question, the prime minister said that he enjoyed good relations with the judiciary, and if anyone had doubts about it they could ask the chief justice.

On the extension of the tenure of Chief of Army Staff Gen. Ashfaq Pervez Kayani, the prime minister said that since he had to take the decision, there was no reason for others to worry about it.

In the aftermath of the latest round of talks with India, which are currently widely being termed unsuccessful, he said that Pakistan wants good relations with India, and both countries are sincere in the effort to improve ties.

The prime minister said that “it is our desire that India along with its people and we along with our people hold talks to improve relations between the two countries.”

He said that India had its own problems, but added that Indian Prime Minister Manmohan Singh had assured him that India was ready for talks on all outstanding issues. Gilani said that Singh was a responsible personality and hoped he would fulfil his promises, because Pakistan and India both wanted dialogue.

“Pakistan wants continuation of dialogue with its neighbour as it is in the interest of both countries,” he said.

Regarding the recent murder of BNP leader Habib Jalib, he said that law and order was a provincial matter and that he had talked to the Balochistan chief minister who, he said, had ordered a judicial inquiry into the matter.

The prime minister ruled out the possibility of talking to terrorists whom he called “beasts” and said that talks could only be held with human beings. Regarding terrorism in Punjab, Gilani said that “the entire Pakistan is ours, and terrorism is a collective issue. And where[ever] there is a terrorist, we will take action.”

Earlier, addressing the inauguration ceremony, the prime minister said that, after Attock Power, Atlas Power, Nishat Power and Korangi Combined Cycle Power Plant, this is the fifth IPP being launched within a short span of one-and-a-half years. The power generated through this plant, he said, will provide the cheapest source of power to the system, that is, at a cost of approximately Rs5.5 per kilowatt hour.

He said it is the current government’s vision to double the power generation capacity of the country within the next ten years by initiating programmes and projects that could add a minimum of 20,000 MW by the year 2020.

This “20,000 MW addition by the 2020 programme” will comprise 6,000 MW on hydro, 6,000 MW on coal, 5,000 MW on gas, 1,000 MW on Naptha and other indigenous fuels and the remainder 2,000 MW from alternative energy resources, especially solar and wind, he said, adding that the government will ensure maximum efficiency gains in the generation, transmission and distribution systems.

Get your act together, IMF tells Islamabad