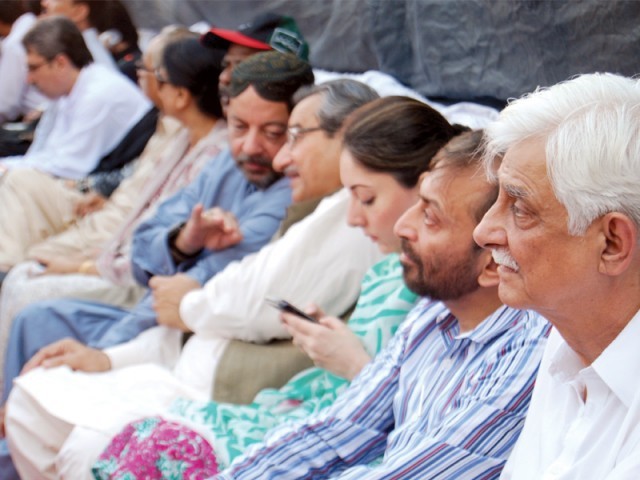 While Pakistan Tehreek-e-Insaf (PTI) leader Imran Khan addressed thousands of people in Lahore, the old guard of politics in Karachi took to Tibet Centre to affirm their support for President Asif Ali Zardari and the democratic process.

The ‘Istehkaam-e-Jamhooriat’ rally organised by the Muttahida Qaumi Movement within, as the party claimed, 40 hours, was attended by tens of thousands of people.

Agha Siraj Durrani and Pir Mazharul Haq criticised Punjab Chief Minister Shahbaz Sharif’s use of ‘derogatory’ language against President Zardari during his speech in Lahore. While PPP veteran Professor ND Khan refrained from directly speaking about Sharif, Haq and Durrani took it on themselves to invoke memories of the 1990s and the ‘mistreatment’ of the PPP by the Pakistan Muslim League-Nawaz (PML-N).

Durrani spoke about the time spent with Sharif when they were imprisoned at Landhi jail in Karachi while Haq said that Ijazul Haq was not the late General Ziaul Haq’s son, but the Sharif brothers – Nawaz and Shahbaz – were.

Both leaders warned the PML-N that they too knew how to speak in abusive language but were refraining from doing so.

PML-Q’s Sheikh said that the PML-N was on the verge of failing and that the party should be ashamed of its acts.

And like clockwork, the time came for the MQM founder and chief Altaf Hussain to deliver his speech. As if on cue, party workers and leaders stood as the air filled with the party’s song – “Mazloomon Ka Saathi Altaf Hussain” – and waved flags and sang along.

Hussain’s speech was largely a rehash of Saturday’s address to party workers, though he did ask for the MQM, PPP, PML-Q and even the Awami National Party (ANP) – whom the MQM has frequently blamed for violence in Karachi – to come together and have another rally for the sake of democracy.

Hussain criticised Sharif’s speech in Lahore and said that the “democratic process must continue”. He did say that government policies can be criticised but in a civil manner.

He also referred to the Sharifs’ past, reminding the audience that the Nawaz and Shahbaz Sharif had “fled to Jeddah”.

“When the Sharif brothers were in jail, sounds of crying could be heard from their cells. Zardari bore his 11-year sentence like a man.”

The MQM leader said that the PML-N should wait for elections instead of trying to derail democracy and engaging in talk of “hanging people upside down”.