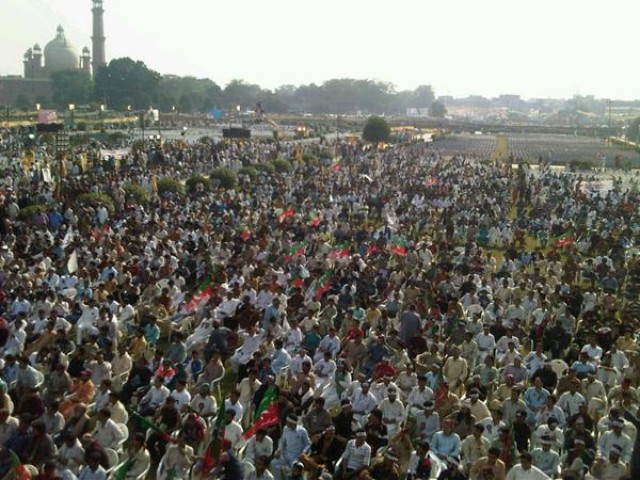 LAHORE: “The youngsters have today proved false the predictions that Tehreek-i-Insaf supporters will not come out for public rallies. Next, we will cast our votes in the upcoming elections, too, for Imran Khan,” said Rafay at the PTI rally on Minar-i-Pakistan grounds on Sunday.

Rafay was one of the large number of students who attended the rally on the call of Insaf Students’ Federation, the student wing of PTI.

Rafay said he and his four classmates at the Lahore University of Management Sciences had come to express confidence in Imran Khan’s leadership. He said he and his friends had already registered as voters and were looking forward to casting ballots for PTI in the coming elections.

Munib Ahmad, a student at Beaconhouse National University, said he had come to the rally with his family. “All other politicians have been tried and tested so many times, it’s only fair that we give Khan a chance,” he said. “He says he will change the corrupt system and ensure justice is delivered to the people,” he said.

Mehwish Khan said she had been motivated to support Tehreek-i-Insaaf because of Khan’s support for women’s and teenagers’ rights. “I haven’t seen so many women at rallies organised by other political parties in the country,” she said.

An ISF office-bearer said the youth turnout had exceeded their expectations. They said the number of students from various education institutes in the city was also more than the 7,000 target the ISF had earlier set itself.

He said inviting Shehzad Roy, Bilal Maqsood and Faisal Kapadia of Strings and Shah Zaman was ISF’s proposal. “They helped keep the audience attentive,” he said.

Like the Pakistan Muslim League-Nawaz workers, most Tehreek-i-Insaf workers from other cities entered the city without paying the toll at Ravi Bridge on Sunday, a National Highway Authority official told The Express Tribune.