What chance does a dialog­ue have when one side turns up with cold ashes in the peace pipe? After this week’s meetin­g...
By Quatrina Hosain
Published: July 17, 2010
Tweet Email 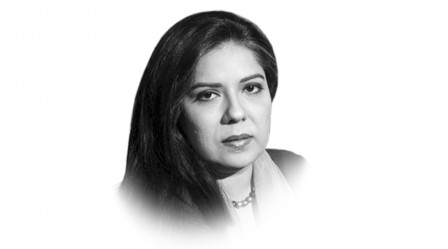 The writer hosts a show on Express 24/7 (quatrina.hosain@tribune.com.pk)

What chance does a dialogue have when one side turns up with cold ashes in the peace pipe? After this week’s meeting between the foreign ministers of Pakistan and India, it has become abundantly clear that India has no intention of improving relations with Pakistan. Clearly forced to the talks by foreign powers that have an interest in seeing the two South Asian rivals at some degree of cordial ties, Indian External Affairs Minister, S M Krishna,  arrived in Islamabad with a single agenda — that of trying to put Islamabad on the defensive by playing the David Coleman Headley card. Who is that, you may ask? Much to the chagrin of New Delhi, few in Pakistan other than the corridors of power in Islamabad and Rawalpindi, know of Headley, who is a household name in India, courtesy an Indian media obsessed by the ISI.

David Headley, born Daud Gilani and reported to be a scout for Lashkar-e-Taiba, is a Pakistani-American arrested in the US on charges of planning terror attacks in Denmark. He has claimed he was one of the planners of the Mumbai attacks and, adding plenty of masala, said he was funded by the ISI. This, of course, sent a tsunami through the rank and file of Indian officials who immediately demanded access to Headley. If a terrorist names the ISI, of course he is telling the truth. Obviously, he has no intention of trying to sow seeds of war between India and Pakistan. Clearly, terrorist organisations have nothing to gain if Pakistan and India revert to the hostilities of 2002 when the two countries drew to the brink of war before sanity prevailed and both sides pulled back from the abyss.

I have no deep knowledge of Mr Headley, his claims or his veracity. But it would help if everyone took a step back and viewed the situation with some degree of scepticism and a healthy dollop of common sense. You don’t have to be a master strategist to realise that if hostilities between India and Pakistan increase, Pakistan would be forced to divert troops to the eastern front —  troops that are critically needed on the western front to contain the terrorists who are sending suicide bombers into our markets, volleyball matches, peace jirgas and schools. About 170 people were killed in the attacks across Mumbai. We lose more of our people to terrorism every alternate month.  I refuse to be apologetic about the Mumbai attacks any more. The Mumbai card has worn thin and no longer elicits sympathy — not when we have to weep over our dead on a daily basis. Just how many Pakistanis have to die before the world sits up and sees Pakistan as the worst victim of global terrorism? Is there a magic number — 20,000, nay 50,000?

The dialogue between Pakistan and India is being held hostage by a group of terrorists who have everything to gain if there is no thaw in relations. The Indians virtually scuttled the talks by having their Indian interior secretary announce an ISI link to the Mumbai attacks on the eve of the talks in Islamabad. Is the Indian leadership truly myopic? We think about terrorism every day. We live with it every day. And if New Delhi cannot understand that, then there is little hope of moving the peace process forward.

For whom the drone tolls