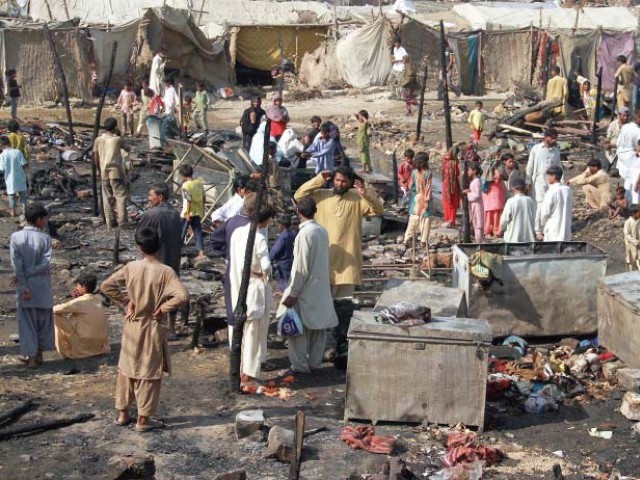 Residents of Shanti Nagar try to pick up their household items and life back together after a fire swept through the settlement on Friday. PHOTO: INP

KARACHI: About one hundred families were displaced when a mysterious fire on Friday reduced their huts to ashes in Gulshan-e-Iqbal’s unplanned settlement, Shanti Nagar. Firefighters, however, managed to save nearly 1,900 huts.

Three people, including an elderly woman Mai Noor and two children, suffered burn injuries and were moved to the burns ward at Civil hospital, where doctors said their condition was out of danger.

The squatter settlement is located on a disputed piece of land and a case about this plot is pending before a trial court.

The slum has a history of being mysteriously hit by fires time and again. Friday’s blaze was the second major incident in eleven months. The last one took place in December 2010 in which a small child was burnt to death and several others were injured while 500 huts were reduced to ashes.

Shanti Nagar emerged about 30 years ago with a few make-shift homes. Now there are thousands of huts where most of the residents are Seraiki-speaking people who do menial jobs to get by.

Witnesses said that most of the men and women were out at work when the fire broke out. “There were a few people present in their homes but they were helpless,” said a resident, adding that “by the time the others came, everything had been reduced to ashes.”

It was not clear what caused the fire as residents offered different and conflicting accounts. Some people said it was an accident but others suspected criminal activity. Some residents said that these fires have become quite common and that the land grabbers are to blame. They demanded an inquiry as well. They said that some people wanted them to vacate the area and that these fires are part of a criminal tactic to force them to evacuate. “If there is a fire after every few days, it cannot be an accident,” said one resident, vowing not to leave the place ever.

The residents were seen collecting whatever belongings were spared. They complained that no government official visited the spot to help them in this tragic hour. Residents claimed that even though they made urgent calls, the fire brigade came late.

At least seven fire engines reached the site and took three hours to extinguish the blaze.

Firemen said that the first fire engine reached within minutes after receiving the news but more were called because the blaze was so intense. If they had not reached, about 2,000 huts would have been destroyed.

The police did not suspect arson. SHO Ehsanullah said the fire was apparently caused by a cooking stove.

Too much detail: ‘In disaster reporting we don’t need to show bodies’