At least ten people, includ­ing seven member­s of a banned milita­nt organi­sation, were killed in a blast at a Friday...
By Manzoor Ali
Published: July 17, 2010
Tweet Email 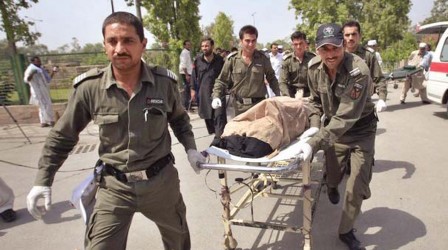 A woman injured in the blast is brought to Peshawar for treatment. PHOTO: REUTERS

PESHAWAR: At least ten people, including seven members of a banned militant organisation, were killed in a blast at a Friday bazaar in the Khyber Agency.

“Ten people were killed. There were three children among the dead and 14 people were wounded in the blast,” Khyber district senior official Shafeerullah Khan said.

Local sources also confirmed the death toll and told The Express Tribune that the blast occurred at about 9 am in Meherban village in the remote Tirah Valley, close to the Pakistan-Afghanistan border. The area is located at the border of Khyber and Orakzai agencies, which is the Nato supply route into Afghanistan. The area has been known for its  lawlessness and its difficult terrain.

Locals, however, said that 15 people were injured. A source said that four of those injured were taken to the Hayatabad Medical Complex in Peshawar, while others were being treated at local health centres. The attackers had planted explosives at the site where a bazaar is held every Friday. According to Khan, a time device was planted in a ditch close to where second-hand cars were being sold. Two intelligence officials also confirmed the death toll, adding that three shops and four cars were destroyed.

Seven of those who died in the attack were identified as activists of the proscribed organisation Lashkar-i-Islam (LI), led by Taliban commander Mangal Bagh. Officials described the area as a stronghold of the LI, which has carried out kidnappings, shootings and attacks in Khyber and has been a target of military operations.

The group’s rival Ansarul Islam (AI) is also reported to have hideouts in the area and local sources said that the attack could be revenge against the Lashkar-e-Islam  as some days ago, the decapitated body of a senior Ansar commander Zafar was dumped in Bara district of Khyber Agency. Zafar was kidnapped two months ago.

Six of those dead were identified as Zardin Khan, Gul Shah, Shakeel, Syed Noor, Rahat and Ramdat Khan. A girl belonging to the Kokikhel tribe was also killed in the blast. (With additional input from AFP)