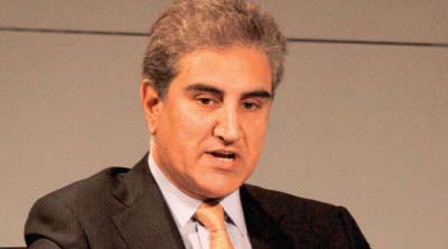 You know things aren’t going well when the host begins criticising the guests even before they’ve left. And so it was with Foreign Minister Shah Mehmood Qureshi and Indian External Affairs Minister S M Krishna. As Krishna was boarding his plane for New Delhi, Qureshi chose to hit out at his Indian counterpart by talking to journalists at the graduation ceremony of newly inducted diplomats at the Foreign Service Academy.

“India did not have the mindset to take things forward; they’d said all issues were on the table but then they decided to be selective about the issues they’d discuss,” vented Qureshi. The foreign minister spoke at length about the “positive attitude of both sides” during the meeting on Wednesday evening. “Pakistan presented a non-paper, which would have taken the process forward and outlined a road map for bridging the trust deficit that has plagued Pak-India relations. India agreed to most of the proposals in principle but wanted to clarify a few points and the meeting ended on a positive note,” said Qureshi.

And then there was the Thursday morning change of heart. Kashmir and terrorism became sticking points for both sides. India’s concession regarding the Sir Creek issue was overshadowed by its insistence that Pakistan give a timeframe for the completion of the trials of the seven Mumbai accused and promise action against the  perpetrators of the Mumbai attacks. The Indian point of view was that it could not settle for anything less as Pakistan had already accepted that the Mumbai attacks were planned on its soil.

So what was the reason for the “last minute glitch”, as Qureshi puts it? “That’s anybody’s guess,” claimed the foreign minister. “But the glitch did not come from Pakistan.

Although the Indian prime minister and external affairs minister wanted the dialogue to move forward, I feel as the head of the delegation, Krishna did not have complete authority and had to keep consulting Delhi for approval.”

For his part, the foreign minister says he can’t understand why things went the way they did. “The position of Pakistan – which the Indians praise – and the progress made over four years of composite dialogue cannot and should not be turned back; we shouldn’t need to start afresh,” asserted Qureshi. “Pakistan had said from day 1 that we were ready for dialogue but these talks had to be substantive and meaningful. We’d even said that if there were limitations, Pakistan would be willing to wait and discuss all issues whenever India was ready.”

However, Qureshi still insisted that there was no “deadlock” and the dialogue would continue so both sides could better understand the other’s concerns and positions.

In spite of these protestations, however, the two foreign ministers will not be meeting each other at the sidelines of the donors’ conference scheduled for Tuesday in Kabul, a fact confirmed by Foreign Office spokesman Abdul Basit.