Krishna refuses to get into war of words

Krishna refuses to get into war of words 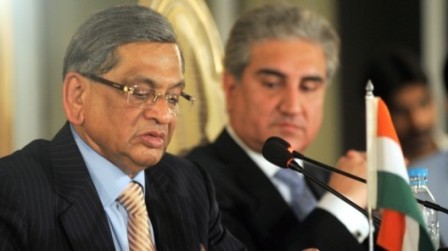 Krishna rejected the charge that he received foreign policy directions from New Delhi repeatedly during their meeting. PHOTO: EPA

Refusing to get into a war-of-words with his Pakistani counterpart, External Affairs Minister SM Krishna on Friday said that some headway has been made in the relationship between the two countries.

Krishna, speaking to the media on his return to New Delhi, rejected Pakistan’s claim that the Indian delegation was not prepared and did not have the mandate for meaningful talks. He said, “India was fully prepared, our mandate was very clear, there was no ambiguity, as External Affairs Minister of this country… leading the talks I have confided myself to the mandate given to me.”

Krishna also rejected the charge made by his Pakistani counterpart that he received foreign policy directions from New Delhi repeatedly during their meeting, he said, “I was totally cut off from India, I never used the telephone, it’s an extraordinary statement, that I have made calls to India.”

On Pakistan’s charge that India was shying away from a timeline for normalising the relationship, Krishna responded, “In diplomatic parleys we don’t go by a timeline unless it is absolutely necessary. No one could fix a timeline for the type of issues we discussed. The question of timeline was not possible or feasible.”

“With reference to 26/11, we did not insist on a timeline. We told that terror is the biggest obstacle between the two countries. Positive action has to be taken by the Pakistani leadership against the perpetrators of the act,” he added.

On a question as to whether the talks were successful, Krishna said, “The very fact that I went to Islamabad and I talked about the core issues involved, if you consider that as a gain then I am willing to go along with it.”

“We talked about the burning issues that confront us. All this was discussed in great detail. We contributed in manner that the trust deficit gets reduced,” he said.

Krishna said, ‘I am not going to score debating points over Qureshi. I would like to concentrate on serious issues. The fact of the matter is that we did discuss serious issues that confront both of us and I do believe that we did make some headway.”

“I have invited him to come to India and I am looking to resume the dialogue from where we left it yesterday,” he added.

‘lack of interest on India’s part’

Earlier Foreign Minister Shah Mehmood Qureshi came out strongly against what he called ‘India’s lack of interest’. Qureshi said that Pakistan feels India is not prepared for peace talks yet.

Addressing the media in Islamabad on Friday, Qureshi expressed disappointment over the talks saying that India was selective in its talks. He said that talks can only move ahead if all issues are discussed, adding that the issue of Kashmir cannot be neglected.

Commenting on his talks with his Indian counterpart, Qureshi said he felt that Krishna was not mentally prepared for dialogue.  He added that the Indian Foreign minister repeatedly received directions from New Delhi, hinting that Krishna had not come with a complete mandate to represent New Delhi. He believed that the two sides should build on what they had achieved in the last few years.

Qureshi also said that if India is not ready for dialogue, Pakistan can wait till it is. But he added that under no circumstances will Pakistan reach a compromise on its interests.

Indian opposition calls meeting ‘talks for the sake of talks’

India’s main opposition, the Bharatiya Janata Party (BJP), demanded the government pull out of faltering peace talks with Pakistan and said that a meeting between foreign ministers from the countries had achieved nothing. The BJP had been opposed to the new attempts at dialogue from the start and senior leaders called them “talks for the sake of talks.”