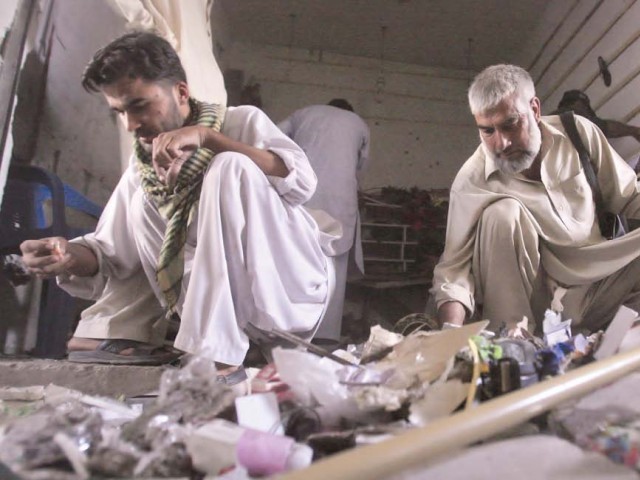 Workers of the police force pick up debris at the blast site (top). A child gets treated after being traumatised in the blast in Peshawar on Wednesday (bottom). PHOTOS: REUTERS

PESHAWAR: At least 12 people, including a woman and two children, were injured in a bomb blast in the Shah Afzal Market on Pajjagi Road here on Wednesday.

Over one kilogram of explosive material was used in the attack, which took place inside a cosmetics shop in a cloth market, according to Peshawar Police Spokesperson Nisar Ahmed Khan. Nearby shops were also damaged in the explosion.

Khan said that the owner of the shop, Kashif, has charged two persons for carrying out the attack due to personal enmity. The official added that he was not sure about the nature of the blast.

No militant organisation claimed responsibility for the attack till the filing of this report. The locality has been previously targeted by militants as well, who blew up schools and shrines.

Bomb Disposal Unit (BDU) officials said that the explosives may have been triggered by a remote control. However, they did not find any traces of the system in the rubble.

The injured were admitted to the Lady Reading Hospital. Doctors at the hospital said the injured are being provided emergency medical services.

Shah Afzal Market, situated on Pajjagi Road, lies within the limits of Mathra police, who had not filed an FIR on the incident till last reports came in.

Earlier in the day, before the blast, City police chief Imtiaz Altaf claimed that normalcy had returned to the city. However, at the same time, he said that militancy in Peshawar is not completely over and he cannot say with certainty that there will be no more blasts.

The blast broke a month-long peace in Peshawar. The last attack in Peshawar took place on September 19 in Nishtarabad CD Market, where six persons were killed and more than 30 injured. The market was targeted with a remote-controlled bomb, which employed eight to 10 kilograms of explosives, according to BDU officials.

Similarly, on August 11, a handcart bomb blast, followed by a suicide blast targeting the police killed at least seven people besides injuring 42 others. Five of those killed were reported to be police personnel in the suicide bombing that took place in the Lahori Gate area of the city.

In addition to that, at least 40 people were killed and over 100 including television journalists and a senior police officer were injured when two blasts ripped through Khyber Super Market in the garrison area of the city on June 11.