We must realis­e that an econom­ic reviva­l in Swat is vital to bring any kind of lastin­g peace to the valley.
By Editorial
Published: October 25, 2011
Tweet Email 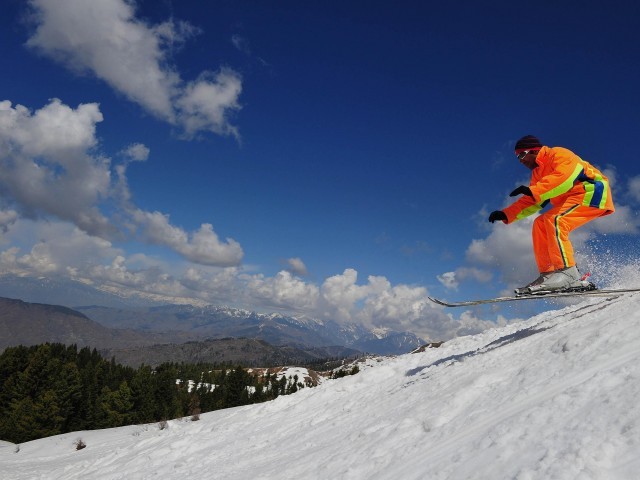 This picture taken on March 20, 2011 shows a local man skiing on a mountain during a four-day skiing competition at the Malam Jabba resort, 300 kilometres (190 miles) northwest of the capital Islamabad in the Swat Valley. PHOTO: AFP

There have been some rather desperate ads in the media inviting tourists back to the beautiful valley of Swat, with its mountains, forests, rushing rivers and lakes. Some of the campaigns carry photographs quite obviously taken from the past, when honeymooning couples walked alongside streams or visitors from overseas fishing for trout. Will those days return? For the people of Swat the only real hope for the future lies in that they do, that the hotels fill up again, the guides find customers to take on tours and skiers once more frequent the Malam Jabba resort, burned down by militants at the height of the Taliban insurgency.

Traditionally, of course, the economy of Swat has depended on tourism. Even as the fighting ended, the floods of 2010 delivered another devastating blow to it, as riverside inns and cafes were washed away, sometimes taking with them the sums of money owners had so painstakingly gathered and invested. Right now, these people need help. Perhaps soft-loan schemes can help them find their feet again and, while the tourism corporations seem to be doing what they can, perhaps authorities can do more to build faith in Swat as a destination where it is safe to take families or set out on holidays. If such measures are taken local tourism could increase, though it will take more time for the international community to return, given the overall situation in our country. To encourage this, more effort to restore the damaged and defaced rock sculptures dating back to Buddhist times also needs to be made, given their allure for tourists.

But most crucial of all is the need to build confidence that Swat is genuinely free and safe from militancy. We must ask if this is possible when men like Maulana Fazalullah remain free and there is talk of the Tehrik-e-Nifaz-e-Shariah Muhamaddi, which is linked to the Taliban, building up caches of arms in homes. We must realise that an economic revival in Swat is vital to bring any kind of lasting peace to the valley and to end the hold the militants still exert in many of its areas.