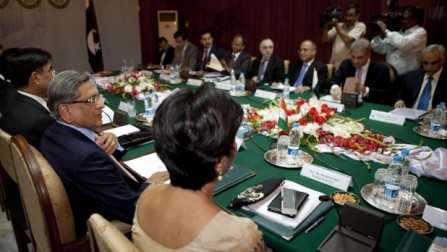 During their meeting, Gilani said Pakistan wants successful talks with India and that the two countries have made significant progress so far.

The Indian media has claimed that the talks between Pakistan and India have been positive, as Indian Foreign Secretary Nirupama Rao has told Indian journalists that the “news is good”.

Krishna arrives with  a message of hope

The much awaited visit of the Indian foreign minister to Pakistan started on a positive note on Wednesday but there are questions on whether this goodwill will result in anything tangible for the two countries.

As he alighted from his plane on Wednesday, Indian Foreign Minister S M Krishna commented that Pakistan and India “will move forward to resolve outstanding issues through talks.” What he did not say was that the Indian side will insist on more focus on terrorism.

On arrival at the Chaklala airbase on Wednesday for formal talks with his counterpart Shah Mehmood Qureshi, Krishna told reporters that all issues could be resolved if both the countries came to the  negotiating table. “We want peace and mutual understanding to move forward,” he commented, adding that he has come to Pakistan with a message of love and peace.

He said the two countries wanted to take forward the peace process with an “open mind and a positive approach.”

However, the Indian media reported that Krishna will take up the issue of terrorism, in light of the interrogation of terror suspect David Headly and the role played in the 2008 Mumbai attacks. The two ministers will meet on Thursday to take up a plateful of issues on the agenda. The talks will take place at the ministry of foreign affairs.

Foreign Office spokesperson Abdul Basit said that there was no set agenda for the talks. “The dialogue would be wide-ranging and all outstanding issues would be on the table,” he added.

“Pakistan wants a paradigm shift in its relations with India,” he remarked. Basit also  said: “Terrorism would be discussed and possible joint efforts would be underlined”.

He disclosed that Pakistan had set an eight points to discuss during interactions with Krishna. The points include Kashmir, Siachin, Sir Creek, water issue, trade, people to people contacts, elimination of terrorism and trust deficit between the two countries.

Similarly, Indian foreign secretary Nirupama Rao also said that the “important thing to be noticed” is that the two countries are ready to look into the matter concerning trust deficit and how it could be bridged.

She said, “we have to move forward together to get our goal achieved that is to solve all outstanding issues.”

A senior official said that Foreign Minister Shah Mahmood Qureshi will also raise the issue of human rights violations in Indian Kashmir with his counterpart.

It is learnt that Krishna will seek Pakistan’s permission for transit trade with Afghanistan through Pakistan besides enhancing bilateral trade between the two countries.