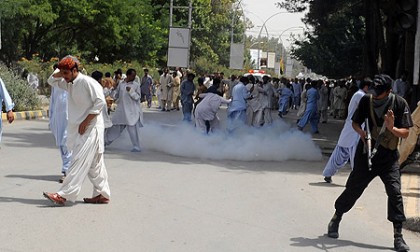 Gunmen assassinated the nationalist leader on Wednesday, as he left his home on the outskirts of Quetta, police and relatives said.

Habib Jalib was secretary general of the opposition faction of Balochistan National Party, which advocates greater autonomy for the southwestern province and campaigns peacefully for self determination. Relatives said Jalib, a lawyer and former MP, was going to drop his children at school when gunmen waiting for him outside sprayed bullets and fled on a motorbike.

“He expired on his way to hospital. The motorcycle riders managed to flee after the firing,” Shah Nawaz, a senior police officer in the hospital, told AFP. The shooting took place in the Sariab neighbourhood on the outskirts of Quetta, the capital of Baluchistan.

Police said the identities of the killers were not immediately clear, but that a manhunt had been launched.  Shops and markets shut down after Jalib’s killing. Authorities also closed Balochistan University for two days in a bid to minimise violent protests.

Balochistan Chief Minister Nawab Raisani formed a judicial commission to probe Jalib’s killing. A judge of the Balochistan High Court has been made head of the commission.

BNP workers staged a protest on the occasion and demanded arrest of the culprits behind the attack. The Balochistan National Party has announced a forty-day mourning period in memory of Jalib.

A three day shutter-down strike has also been announced in Qalaat, Mastung, Hub, Bela, Noshki and Khuzdar. The University of Balochistan will also remain closed for two days.

‘Parliament has gone beyond its mandate’