An old woman and a boy were killed while 20 others were injure­d in rain-relate­d incide­nts in differ­ent parts of...
Published: July 14, 2010
Tweet Email 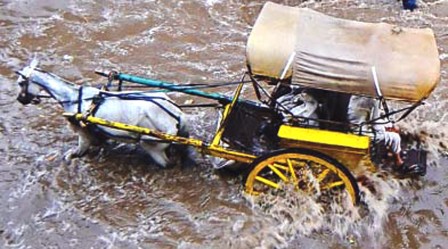 FAISALABAD/ RY KHAN: An old woman and a boy were killed while 20 others were injured in rain-related incidents in different parts of Faisalabad on Monday.

In the Shamsabad locality, a 10-year-old boy was killed when a dilapidated wall collapsed and an aged woman was killed due to a lightning strike. Similarly, about 20 people were injured in roof and wall collapse incidents as well as signboards and hoardings falling in different parts of the city. Rescue volunteers shifted all the injured to various hospitals around the district. “It is impossible to understand why the authorities are never prepared for the monsoon. It rains every year but every year there is disaster,” said Asad, a local who lost half of his house in a roof collapse.

“We pray for rain all year and then when we get it we wish it would go away,” he said. The heavy rain started around 9.30 am and continued throughout the day.

According to the local Met Office, 100-millimeters of rain were recorded in the city and the University of Agriculture Faisalabad (UAF) claimed that the city received 125 millimeters of rain by noon. Due to the heavy downpour, low-laying areas were inundated and the rainwater entered several houses in the city. “It was horrible, our entire furniture was ruined and one of my three-year-old cousins drowned and almost died. Her parents had to search for her in the water in their own house. They found her and she was alive but she is in the hospital,” Naeem Sadiq, a resident said.

Residents in Faisalabad complained that the monsoons always meant that there would be loss of life and property. “It is hard to understand why the government doesn’t protect us. We should be able to enjoy the cool weather rather than worry for our lives and the lives and safety of our children,” said Salma, the mother of four, who lost her son in the flood.

Faisalabad residents as well as pedestrians faced a great deal of difficulties during the rainy weather as the Water and Sanitation Agency (Wasa) sewerage system choked and gutters started overflowing throughout the district. Utility services including electricity supply, telephone service and potable drinking water was suspended in several parts of the city for two days.

On the other hand, farmers in Rahim Yar Khan hailed the monsoon season as 90 millimeters of rain was recorded by early morning in the city. Farmers have said that their cops needed water and they had been waiting on the rains for a month. “The sugarcane and rice crop cannot be sustained for very long without rain,” they said, adding that many were beginning to fear they would lose their entire produce. Cotton farmers have expressed concern about the situation and said that ‘too much rain was not good for cotton.’

Rain streams in Koh-i-Sulemanki were also flooded after the monsoon rains in Dera Ghazi Khan. Four people died after an avalanche in the area. “Mudslides and collapsed rooftops are a common feature after the monsoons,” Nadeem, a local, said. Roads from Barthi, Fazla Kach and Roghan were completely blocked for traffic and water levels reportedly reached the windows of most vehicles on the roads. Cotton crop has been severely affected by the rain. The Met Office has predicted more rains in the next few days.