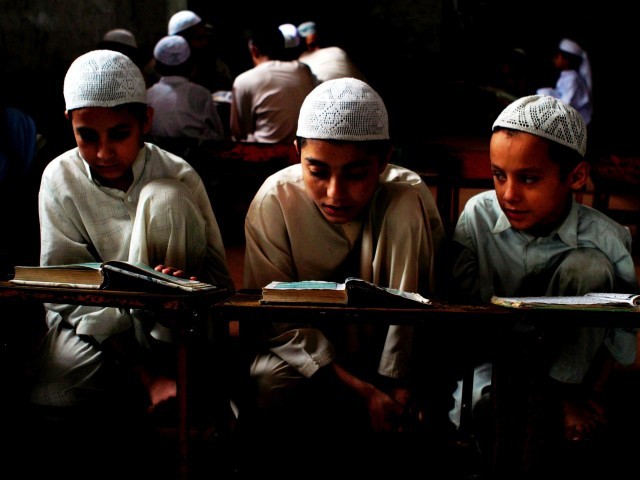 The government has asked seminaries to rationalise their syllabus and impart modern education to their students. This step would help them broaden the knowledge base of their students and enable them to become useful citizens of the country.

This was stated by Religious Affairs Minister Khurshid Shah, while speaking on the madressa reforms policy of the government, during Question Hour session of the National Assembly on Monday.

The Ittehad-i-Tanzeemat-i-Madaris Pakistan (ITMP) (an alliance of seminaries organisations), has agreed to introduce compulsory contemporary subjects at matric and intermediate levels, he said.

The alliance, he added, insisted on extension of recognition of five wafaqs/tanzeemat (federations) as full-fledged boards. “The government, after considering various options, agreed to the demand of the ITMP, provided a regulatory authority was established over and above these proposed boards to oversee the functions of the boards, as well as the seminaries, affiliated with them,” he said.

An agreement between the interior ministry and ITPM was signed on October 7 last year, envisaging a comprehensive madressa reform with a direction towards achievement of goals fixed by the government, he said.

As per the agreement, negotiation with regard to determining the contours of the regulatory authority are being carried out by a sub-committee, consisting of two government nominees and two representatives of the ITMP, he said, adding that it is hoped that soon these issues would be resolved.

“The seminaries operating in the jurisdiction of the Islamabad Capital Territory (ICT) are being looked after by the Interior Division,” he said. Presently, three model seminaries are functioning under the Pakistan Madressa Education Board of the religious ministry – one for girls in Islamabad and two for boys in Sukkur and Karachi.

Shah said that the previous government had negotiated the reform with the ITMP, but no tenable results could be achieved. The present government took up the matter and discussed the focused goals with respect to madrassas, he added.

The reform policy aims to achieve three objectives: progress on registration of madrassas, their mainstreaming and rationalisation of their syllabus.

Up to August this year, 10,973 madrassas have been registered. “In addition to these madrassas, there were 8,749 others, which had been registered prior to promulgation of the 2005 ordinance,” he added.

He expressed his satisfaction over the progress and said most of the madrassas had been registered.

The main agenda of the reform was mainstreaming and dove-tailing of madrassas with the existing educational system, he added. After abolition of the concurrent list through 18th amendment, the subject of Islamic education has been devolved and transferred to the provinces, he said.