A woman, who was public­ly beaten by her husban­d and brothe­r on Monday, has been given shelte­r.
Published: July 14, 2010
Tweet Email 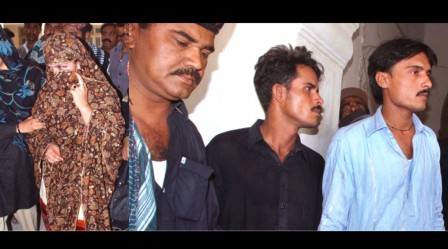 Hafizan (left) was tortured in public in Larkana on Monday by her husband, Hameed, and brother, Zahid. The accused have been sent on a three-day remand into police custody. PHOTO: APP

A woman, who was publicly beaten by her husband and brother on Monday, has been given shelter while the men have been sent on a three-day remand into police custody.

Hafizan Bhutto’s husband, Hameed alias Hajan Bhutto, and her brother, Zahid Bhutto, who is also a police constable, were presented in the court of the fourth additional and sessions Judge Jehangir Ahmad Dayo on Tuesday.

During the hearing, Hafizan, 27, told the judge that she was afraid her husband and brother would try to kill her again and she wanted to stay with her brother-in-law, Ghulam Shabbir Bhutto. She also pleaded the court grant her a divorce from her husband.

After recording her statement, the court sent her to a Darul Aman for two days and told her brother-in-law to submit bail papers after which he would be allowed to take her away from the shelter.

Hafizan was escorted amid tight security.

Her husband has insisted that he is innocent. He spoke to the media after the hearing. He claimed that she was suffering from fits and was having one such attack on Monday when the incident took place. His wife was not ‘kari’ and he never wanted to kill her, said Hajan, adding that if he had intended to kill her he would have done it inside their house.

Hafizan, a resident of Chandka Pul, used to live at her father’s house because her husband beat her. On Monday, she was beaten in public and declared a ‘kari’ by Hajan and her brother. They were forcibly taking her away in a car when she screamed and attracted the attention of other residents. They rushed to the car and managed to free her with the help of the police.

The DPO Larkana suspended police constable Zahid Bhutto. An attempted murder and public torture case was also filed against four men in the Rehmatpur police station. Before the hearing, Hafizan was given shelter at the women’s police station.

The chief of the Women’s Complaint Crisis Cell in Larkana came to visit her at the station, where Sindh Minister for Women’s Development Tauqeer Fatima Bhutto assured her that the government would provide her assistance. She promised that once the hearings are over, she would be given a job at the police department.

Hafizan was medically examined and the report is expected in the next two days.

According to PPI, women workers of the Pakistan Human Rights Development Organisation held a demonstration in Hyderabad against the public beating.

Kausar Parveen, president of the organisation’s women wing, said that this act violated the recently passed women’s protection act. The women of Sindh are insecure because they are now being tortured publicly and no one can stop it, she said.

Parveen believed that if the people in government cannot protect women then they had no right to rule. She appealed to political and religious parties and social organisations to come forward and help protect the rights of women.