The mercur­y level in Lahore fell sharpl­y on Monday after the city receiv­ed its first monsoo­n rain. The city...
Published: July 13, 2010
Tweet Email 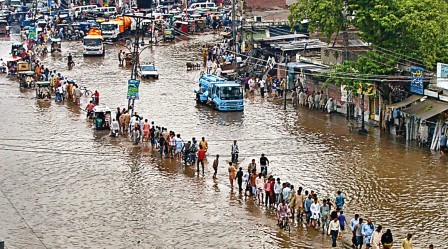 LAHORE: The mercury level in Lahore fell sharply on Monday after the city received its first monsoon rain.

The city received two spells of heavy downpour, each lasting for around 20 minutes. A Meteorological Department official told The Express Tribune that about 65 millimetre of rain was recorded during the two spells. He said that it brought the temperature down to 29 degrees Celsius.

The citizens took a sigh of relief after the rainfall. However, the happiness was short lived as it was accompanied by recurrent unscheduled power outages and roads inundated with water. Most of the city roads turned into ponds despite the Water and Sanitation Agency (Wasa) and the City District Government of Lahore’s (CDGL) tall claims about the monsoon action plan.

Chief Minister Shahbaz Sharif who remained active during the last two monsoons and visited rain-affected areas ensuring that the Wasa staffers performed duties efficiently was missed yesterday.It provided an opportunity to Wasa officials to evade work during the day.

Rain water had been drained in most areas of the city by late evening. The Wasa officials maintained that they were well-prepared and could have drained the rain water out in time had their efforts not been hampered by incessant power outages. They added that the garbage heaps that were not removed from around the sewers due to the Solid Waste Management employees strike also affected the pace of their work.

Power remained suspended in most parts of the city throughout the day starting 4am in the morning after the first  downpour. In some areas, the electricity was restored by noon. The Met Office has forecast more rains with intervals in the next 48 hours.

Journalists sit it out