Pak-US ties to be based on mutual interest, respect: Zardari

Pak-US ties to be based on mutual interest, respect: Zardari 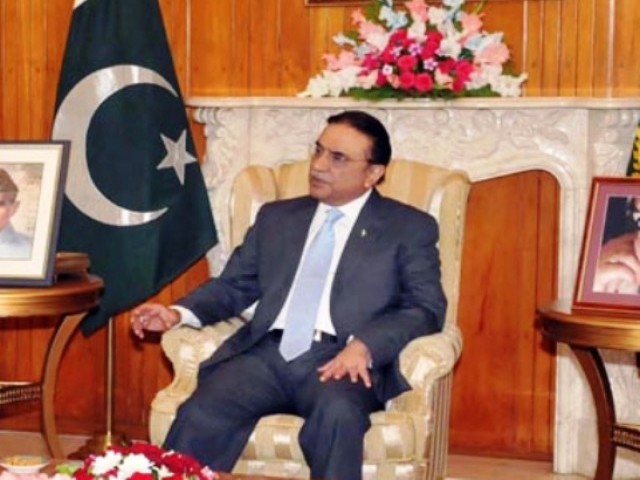 Zardari said Pakistan supports all efforts for regional peace, prosperity and connectivity, based on existing realities of the region. PHOTO: NNI

ISLAMABAD: President Asif Ali Zardari on Thursday said relations between Pakistan and United States must not be transactional, and stressed for a long-term partnership based on mutual respect and shared interests.

He was talking to Marc Grossman, US Special Representative for Pakistan and Afghanistan who called on him at the Aiwan-e-Sadr.

Briefing the media about the meeting, spokesperson to the President Farhatullah Babar said that matters relating to Pak-US bilateral relations, regional security situation, emerging situation in Afghanistan and the fight against militancy were discussed during the meeting.

Zardari said Pakistan supports all efforts for regional peace, prosperity and connectivity, based on existing realities of the region.

He stressed on following the clearly defined, well-documented and mutually agreed terms of engagement between the two countries, which he said was necessary to avoid operational irritants that hamper the relationship.

Babar said the president emphasized that a long-term, sustainable and multi-dimensional relationship with the US should be based on mutual interest, trust and respect.

Zardari called for exercising mutual restraints in public pronouncements that adversely impacted the bilateral relationship. He also emphasized the need to develop a cooperative and a joint roadmap to overcome the trust deficit.

He said no country had made greater contributions and sacrifices in fighting terrorism than Pakistan adding that Pakistan was committed to pursue the fight against militants till its logical conclusion. He said the enemies of peace would continue to sabotage peace process but “we should not let the non-state actors hold hostage the governments in the region.”

Zardari also emphasized on socio-economic development and imparting education to the youth of the militancy-hit areas to permanently change the militant mindset and sought the international community’s support and cooperation in this regard.

Zardari said Pakistan had abiding interest in the peaceful, stable, secure and prosperous Afghanistan and would continue to support every effort of international community in this regard, adding that any development in Afghanistan was directly impacting Pakistan and that it supports Afghan-led and Afghan-owned reconciliation process.

Speaking on Rabbani, he said that the professor was a friend of Pakistan and an honest and serious interlocutor. He termed his assassination as an attempt to sabotage the peace and reconciliation process.

He however, expressed surprise over the reaction in the wake of Prof. Rabbani’s assassination.

“Despite negative propaganda against Pakistan, we are committed to the regional peace and have decided to attend the forthcoming trilateral summit of Afghanistan, Pakistan and Turkey in Istanbul next month aimed at peace and stability in the region.”

Grossman appreciated Pakistan’s struggle against militancy. He also assured US governments continued support for peace and stability in the region.

US Ambassador in Islamabad Cameron Munter, Rear Admiral Philip Davidson, senior military advisor to ambassador Grossman and other senior officials of the US embassy were also present in the meeting.