Lesser regist­ration of cases in Baloch­istan and K-P does not necess­arily repres­ent low crime rate there.
By Bilal Raza
Published: October 13, 2011
Tweet Email 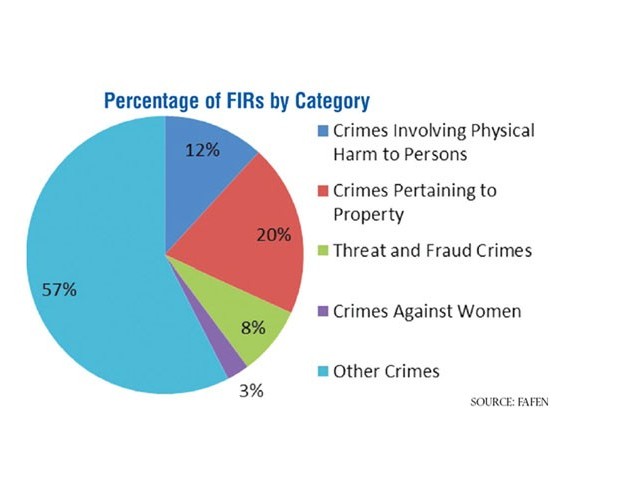 STICKING OUT: 78% of the total 1,063 FIRs filed for crimes against women were registered in Punjab.

Punjab is the most violent province in Pakistan, or so the data collected by Free and Fair Election Network (FAFEN) in 70 districts across the country suggests.

In July, FAFEN monitors visited 70 District Police Officers’ (DPO) offices to collect information on 27 offences covered by the Pakistan Penal Code. They monitored 28 districts in Punjab, 18 in K-P, 12 in Sindh, 11 in Balochistan and one in Islamabad Capital Territory (ICT). They noted that 40,446 First Information Reports (FIRs) were registered, of which 3% cases involved violence against women.

The report monitored 27 offences and categorised them into five categories: physical harm to persons, crimes pertaining to property, threat and fraud, crimes against women and other crimes.

However, the report said that relatively higher registration of cases in Punjab may be attributed to its high population, willingness of people to register FIRs and better response by the police and to the greater outreach of FAFEN monitors in Punjab.

Similarly, lesser registration of cases in Balochistan and K-P does not necessarily represent a low crime rate. It may be attributed to limited outreach of FAFEN, non-registration of cases by the victims, unavailable infrastructure or to people’s tendency to resolve their conflicts through informal structures like Jirgas.

Ninety-one per cent of the total 3,351 threat and fraud crimes were registered in Punjab, both K-P and Sindh claimed an equal share of 4%.

It added that nearly three fourths of all murder cases reported in Sindh were registered in Karachi district alone, attributing it to the wave of target killings along with its population density.

The report said theft, hurt, counterfeiting currency notes, robbery and dacoity and motor vehicle theft were among the 10 most frequent crimes while hurt, murder, attempted murder, theft and robbery and dacoity were the most widespread crimes in July 2011.

FAFEN is a network of 42 civil society organizations working to foster democratic accountabilities in Pakistan. It is governed by the Trust for Democratic Education and Accountability.