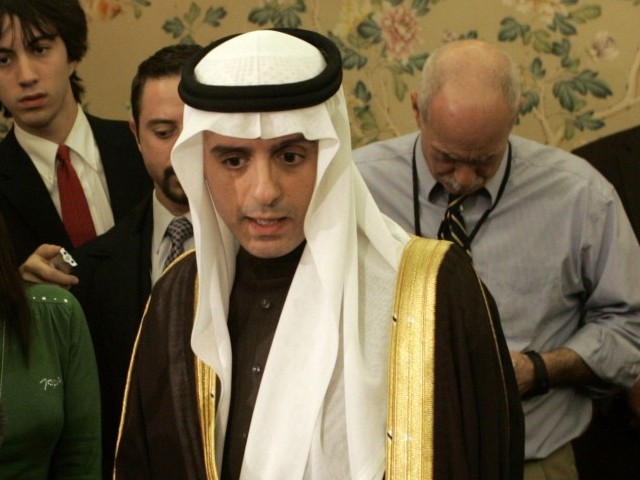 This November 27, 2007 file photo shows Saudi ambassador to the US Adel al-Jubeir as he speaks to the press during the Middle East peace conference at the US Naval Academy in Annapolis, Maryland. US agents have foiled what has been called a "significant terrorist act" linked to Iran which would have included the assassination of the Saudi US ambassador and other attacks, US media reported October 11, 2011. PHOTO: AFP

WASHINGTON DC: US authorities thwarted an alleged plot to bomb the Israeli and Saudi Arabian embassies in Washington and assassinate the Saudi ambassador to the United States, court documents and a US official said on Tuesday.

The alleged plotters were identified as Manssor Arbabsiar, 56, and Gholam Shakuri — both originally from Iran — in the criminal complaint unsealed in a federal court in New York City. Arbabsiar, a naturalised US citizen, was arrested in late September. Shakuri is still at large.

The plot was disrupted by the Federal Bureau of Investigation (FBI) and Drug Enforcement Administration. US officials said the Iranian in custody had confessed to the plot and provided information on the involvement of various factions of the Iranian government who were behind the plot.

Court documents identified Shakuri as a member of the Quds Force, a branch of the Iranian Islamic Revolutionary Guard Corps.

Shakuri approved the plan to try to kill the Saudi ambassador during telephone conversations with Arbabsiar, the complaint said.

In July and August, Arbabsiar paid $100,000 to a DEA informant for the murder of Saudi Ambassador Adel al Jubeir, court documents said.

The men are charged with one count of conspiracy to murder, two counts of foreign travel and use of interstate and foreign commerce facilities in the commission of murder for hire and one count each of conspiracy to use a weapon of mass destruction and conspiracy to commit an act of terrorism.