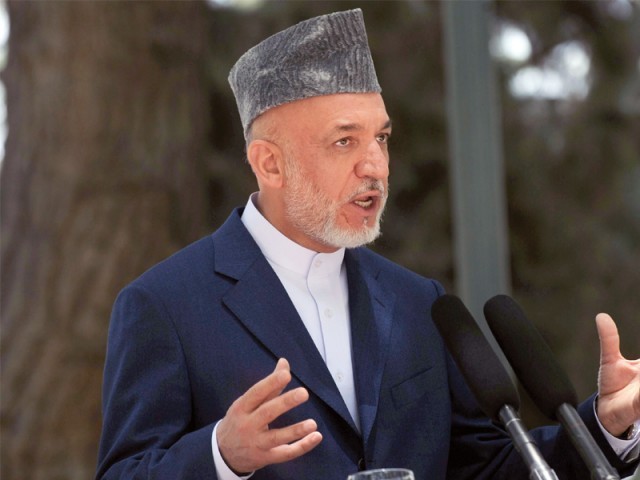 KABUL: Afghan President Hamid Karzai demanded on Saturday that Washington increase pressure on Islamabad to act against insurgents he says are using Pakistani soil to attack Afghanistan, warning that Afghans were running out of patience.

The demand by the Afghan president was put forward in talks held with US special envoy to the region Marc Grossman in Kabul. “The Afghan president asked Grossman to put more pressure on Pakistan so that future meetings with them should bring a positive result,” one official at the presidential palace told AFP anonymously.

Relations between Afghanistan and Pakistan, long mired in distrust, have recently deteriorated with Kabul alleging that the murder of its peace envoy Burhanuddin Rabbani was hatched in Pakistan and carried out by a Pakistani.

Kabul accused Islamabad of hindering its investigation and also claimed to have foiled a plot to assassinate Karzai, once again allegedly hatched in Pakistan.

Karzai said further meetings with Pakistan “should bring positive results, because after all these suicide attacks and terrorism the people of Afghanistan are losing their patience,” added the statement.

The press release quoted Grossman as promising that the US will “continue putting pressure on Pakistan to take practical steps forward”.

Meanwhile, the US believes that Pakistan’s cooperation remains vital to American national security despite having ‘some issues’, the White House said amid reports of improved counter-terror collaboration between the two sides.

“The cooperation we have with Pakistan is extremely important in terms of our national security objectives, in terms of protecting Americans, in terms of taking the fight to al Qaeda. And that’s why we continue to work with the Pakistanis and try to build on that cooperation,” Jay Carney, President Obama’s spokesman said while responding to a question at a daily briefing.

Carney noted the US – which has relied on Pakistan for enforcing security along the porous Afghan border as well as for transporting Nato and US supplies to landlocked Afghanistan in the decade-old conflict – has an “important” relationship with Pakistan.

“We have had enormous successes through our cooperation with Pakistan,” the spokesman said, echoing President Obama’s remarks at a press conference on Thursday that the US could not have succeeded in crushing al Qaeda in the Pak-Afghan border region without Islamabad’s cooperation.

However, Carney’s comments also acknowledged disagreements existing on some issues between the two anti-terror partners.

“We have also made it clear that we have issues with Pakistan at times, and that it is a complicated relationship.”

Portfolio politics: Too many men, not enough ministries