The portio­n of Madar-i-Millat Road which had collap­sed in May due to leakag­e from the main sewage pipe has been...
By Yasir Habib
Published: July 10, 2010
Tweet Email 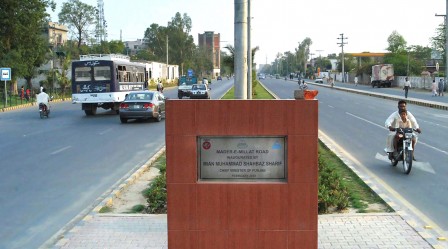 LAHORE: The portion of Madar-i-Millat Road which had collapsed in May due to leakage from the main sewage pipe has been repaired and opened for traffic.

The provincial government has declared the road a model for future projects.

The road takes off from Peco Road (also known as Maulana Shaukat Ali Road) passes through residential and industrial areas including Green Town, Township and Quaid-i-Azam Industrial Estate and ends at the College Road.

A 333-metre portion of the road was damaged in May due to leakage from main sewer pipes near Gate No 13 and 15 of the Government Employees Co-operative Housing Soceity, near Nursery Stop and between Hamdard Chowk and Pully Stop. Repair work was started on May 20 and completed on July 3.

The Frontier Works Organisation (FWO) was the contractor in charge of construction. The Nespak vetted the engineering design and the Water and Sanitation Agency (Wasa) was responsible for commissioning the drain project. A spokesperson for the Frontier Works Organisation (FWO told The Express Tribune that they were able to repair the damaged portion without a delay. He claimed that the FWO had no experience in laying down sewage lines, “The work was thrust upon us, the Nespak and the Wasa who had the expertise available did not guide us through the project.”

Imtiaz Ahmed, the Wasa spokesperson, held the FWO responsible for the damage. He dismissed the lack of expertise excuse asking, “If the FWO lacked expertise in laying down sewage lines, why did it take up the project in the first place?”

He said that the FWO apparently did not conduct the “pressure test” before starting the construction work.

The FWO spokesperson further said that the project design was faulty and held the Nespak and the Wasa responsible for its failure to build a screening chamber during the first phase. “They failed to brief us about the construction of the chamber,” he added.

Nespak assistant project director, Shahid Mehmood, said that there was no flaw in the project design. He added, however, that implementation problems keep cropping up in development works. The construction of Madar-i-Millat Road was initiated under the Lahore Road Rehabilitation Project Phase-II (in LDA-controlled areas of the city) launched in 2008.