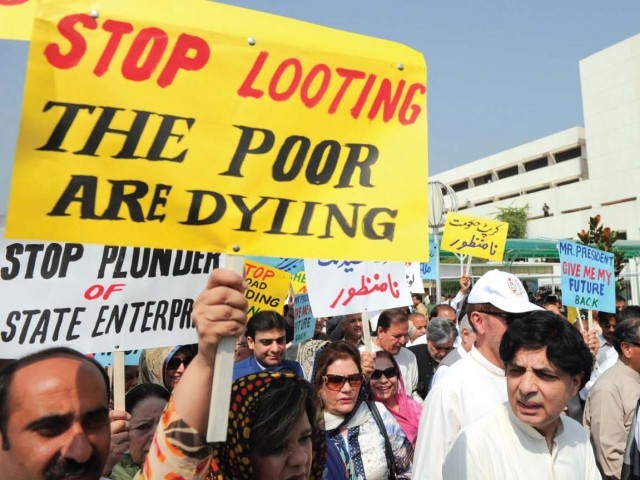 Chaudhry Nisar protesting along with other PML-N members and opposition leaders. PHOTO: AFP

ISLAMABAD: Protesting against the government’s inaction over the ongoing power crisis, parliamentarians, led by the Pakistan Muslim League-Nawaz (PML-N), staged a protest and sit-in on Thursday in front of the presidency.

The protest also included angry sloganeering from the ruling party’s very own parliamentarian. “A government that is failing to protect its people does not deserve to rule the country,” Nasir Ali Shah from the Pakistan Peoples Party (PPP) Quetta’s Hazara community said.

MPs from almost all opposition parties and even an uneasy government ally, totalling about 100, took part in the protest.

Members of the Q and like-minded factions of the Pakistan Muslim League and Jamiat Ulema-e-Islam-Fazl (JUI-F), rallied with the PML-N members from the parliament to the presidency.

Head of his own PPP faction, Aftab Ahmed Khan Sherpao and a couple of members from the Federally Administered Tribal Areas (Fata) were also among the protesters.

Almost 100 MPs and 50 activists later staged a brief sit-in outside the official secretariat-cum-residence of President Asif Ali Zardari where members from all parties addressed protesters.

Although a large number of law-enforcement agencies personnel were on their toes – both in and outside the presidency – at no point did they confront the marching MPs who were led by National Assembly opposition leader Chaudhry Nisar Ali Khan.

Addressing the parliamentarians, Khan warned the government that his party would hold more such protests if the administration did not steer the country out of the multiple crises it was facing.

“We are here to make the resident of this house [the Presidency] realise that the people of Pakistan are in pain … and they are desperately looking towards their rulers for help,” Khan said.

The PML like-minded group chief Salim Saifullah Khan said there was a crisis in the country and nobody seemed serious about tackling the challenges.

“The government should have focused on solving people’s problems … but unfortunately, that is not happening,” Sherpao said.

“The government’s numerical strength in parliament doesn’t reflect the public support for it,” he added.

Blast from the past: MQM-H chief arrested in a 10-year-old kidnapping case