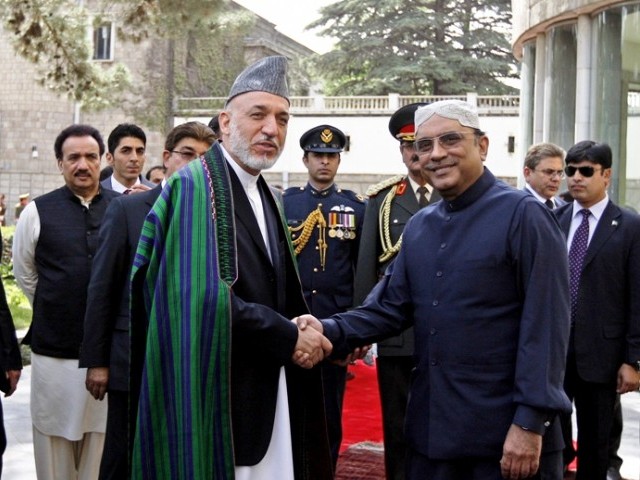 Relations between Pakistan and Afghanistan have fractured after the murder of former Afghan president and peace jirga chief Professor Burhanuddin Rabbani. PHOTO: AFP/FILE

ISLAMABAD: Pakistan has angrily rejected allegations from Afghan officials that its intelligence agency masterminded the assassination of Kabul’s chief peace negotiator with the Taliban.

An investigative delegation established by President Hamid Karzai said evidence and a confession provided by a man involved in Burhanuddin Rabbani’s killing on September 20 had revealed that the bomber was Pakistani and the assassination had been plotted in Pakistan.

“Instead of making such irresponsible statements, those in positions of authority in Kabul should seriously deliberate as to why all those Afghans who are favorably disposed towards peace and towards Pakistan are systematically being removed from the scene and killed,” Pakistan’s foreign ministry said in a statement.

“There is a need to take stock of the direction taken by Afghan Intelligence and security agencies.”

Rabbani’s killing derailed efforts to forge dialogue with the Taliban to end the 10-year war and raised fears of a dangerous widening of Afghanistan’s ethnic rifts.

Hundreds of Afghans took to the streets of Kabul on Sunday to condemn recent shelling of border areas by Pakistan’s army and accused the country’s Inter-Services Intelligence spy agency of involvement in Rabbani’s killing.

In another sign of rising Afghan frustration with Islamabad, the peace council which Rabbani headed reiterated earlier comments by Karzai that negotiations should continue, but with Pakistan, rather than the Taliban, suggesting Islamabad was directing some militants from behind the scenes.

Karzai has questioned whether the Taliban has a functioning leadership that can be negotiated with, while his national security adviser told the Wall Street Journal that the talks were ‘a joke.’

The Pentagon on Monday said that while a peace deal remained an important U.S. goal in Afghanistan, the Afghan government’s decisions regarding the peace initiative would not undermine the NATO-led coalition’s fight as the horizon for foreign troops’ presence grows shorter.

“The idea that reconciliation may not be as far along as it ought to be, or the idea that they’re still challenges to be overcome in reconciliation, does not negate the security work that we’re doing,” said Pentagon spokesman John Kirby.

Afghan leaders have long questioned Islamabad’s promises to help bring peace to their country. Pakistani intelligence is suspected of ties to militant groups in Afghanistan, especially the Haqqani network, one of the deadliest.

Pakistan sees the group as a strategic asset, a counterweight to the growing influence of rival India in Afghanistan, analysts say.

The network’s leader, Sirajuddin Haqqani, told the BBC in an interview broadcast on Monday his group was not linked to the ISI.