A young Lancas­hire lad steppe­d smartl­y off a troop ship in Karach­i all of 68 years ago and never forgot the thrill of...
By Zahrah Nasir
Published: July 13, 2010
Tweet Email 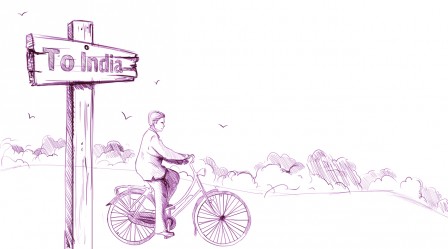 A young Lancashire lad stepped smartly off a troop ship in Karachi all of 68 years ago and never forgot the thrill of what followed. The lad was my Uncle Tom, my father’s elder brother and, when I was knee-high to a grasshopper, he used to entertain us all with amazing stories of India which always somehow included cricket, football and, of all places, Rohri Junction.

Throughout my childhood and teens — indeed right until his retirement — Uncle Tom worked away in a rambling cotton mill in the Lancashire village of Chatburn. We kids would often see him surfacing for a breath of fresh air and a slice of relative quiet by the open mill door as we raced to and from school or to and from the village shop. Chatburn revolved around the mill, the majority of the population, both male and female, working in its incredibly noisy bowels which, to our delight, Uncle Tom occasionally gave us a limited tour of. Our young eyes were overwhelmed by the monstrous roaring machinery in between which workers, including Uncle Ted, Uncle Alf and ‘Fish Wife Kate’, talked to each other in sign language. This Uncle Tom was a very different man from the smiling, impeccably uniformed British Air Force crewman who peered down at us from a silver-framed photograph displayed on the polished heights of the upright piano in his and Aunty Ruth’s living room.

Not known for writing letters, it took many years to convince Uncle Tom to sit down, put pen to paper and write a short account of his time in India and send it to me here in Pakistan. This he did back in 1997 and I reproduce it below as it makes very interesting reading.

“It was in August 1942 that I arrived in Quetta after spending three weeks in a Karachi transit camp out at the airport. In those days there were two airfields, the main airport and another RAF one very near. This was a permanent peace time one with married quarters etc. When we were first there, the city was out of bounds but the cantonment was a town on its own with shops, cinema, hospital etc. If we hadn’t come through the city from the docks, we would probably have thought that we were in Karachi. I can remember it being very hot and a lot of sand. In fact looking out of our tent we felt we were on the edge of the Sindh desert. Up to reaching Karachi all our travel had been by ship. Liverpool to Durban calling at Freetown, Durban to Suez with five weeks in Egypt, Bombay for two weeks and then on to Karachi and all on different ships.

“The next part of our journey was very interesting; the train journey from Karachi to Quetta, changing at Rohri Junction, crossing the Sukkur Barrage by lorry. The hustle and bustle of Indian railway stations was something to see and from what I’ve seen on television, it’s still the same today.

“As far as I can remember, we travelled by local train to Rohri Junction and then by a special train to Quetta. My memories of Quetta are very pleasant; not much work, so it could get a bit boring, but plenty of football and cricket! I was a member of the RAF team that won the Military Cup. In those days Quetta was a military town with a big staff college and quite a number of barracks, mostly on one level because, as you may be aware, there was a big earthquake in 1935 when a lot of people were killed, including many army and RAF personnel.

“When we were in East Camp, a local policeman used to pass by every night on the way to his village. He told us that he was on his bicycle doing his rounds out of town when the earthquake struck. He was flung to the ground unhurt and raced back to town to find that all his family had lost their lives. When you think that it had only been seven years previously, Quetta had recovered very well.

“We didn’t notice poverty so much in Quetta as in Bombay and later in Calcutta. I was in Quetta when we were cut off for a time because there were floods lower down and the Indus burst its banks. I remember a small quake one night, it rattled the doors and window shutters but people were reluctant to get up because when the camp settled down for the night, the jackals and hyenas roamed around looking for food. One night a hyena banged against our door then let out a blood-curdling laugh and frightened us all to death.

“East Camp was about a mile out of town. There was a road to a hill village on one side and an older road used by camel caravans on the other and it was a wondrous sight to see them swaying past fully loaded up. Hannah Lake was a few miles away and we used to ride out to it on our bikes. One time we passed by some tribesman sitting at the roadside with rifles across their knees so I quietly said, ‘Keep pedalling, chaps!’ I don’t think they meant us any harm but they looked a bit grim and didn’t return our greetings.

“The tongas are something else I remember. In Bombay and other places tongas were 4-seaters but in Quetta they were only 3-seaters and there was always a race to get the back seats because last one on had to sit next to the driver. The horses always had so much wind it could be unpleasant sitting up front!

“I was a member of the squadron advance party to leave Quetta on our way to Ceylon via Karachi and Bombay. We could only get so far on the train and then had to travel in small boats down the Indus through the floods all the way to Rohri Junction where we managed to get on a train.

“What a change I saw in the countryside from the last time I passed through! Karachi had caught the edge of the heavy rains and the desert had started to bloom. It wasn’t so much colour but green grass and weeds by the side of the road.

“While I was in Karachi this time we did get a trip in to the city to play football against an Indian Navy team. We were in Karachi another three weeks before leaving for Bombay where we stayed for two weeks before sailing to Ceylon. We didn’t receive our aircraft until February 1943 so you can say that we spent one year wandering around in transit camps first which makes one wonder how on earth we won the war!

“Much later on, well after the war had ended, I worked with quite a few Pakistanis in the mill and we got along fine and then, just a couple of years ago, in 1995, we were in Settle, a tiny Yorkshire town, walking around the market when I heard a shout, ‘Idher ow, Tom!’ and it was an ex-cook from Quetta running a market stall!

“Altogether I wandered around between India, Ceylon and Burma for a good four years and was very lucky since, if we had left England two or three months before we did, I could have been in Rangoon or Singapore.”

Uncle Tom always had a soft spot for Karachi and Quetta but, quite wisely, decided against returning for a holiday after seeing on television the mayhem these cities have become. He passed away, at the ripe old age of 88, on June 20th 2010. May he rest in peace and his stories live on.