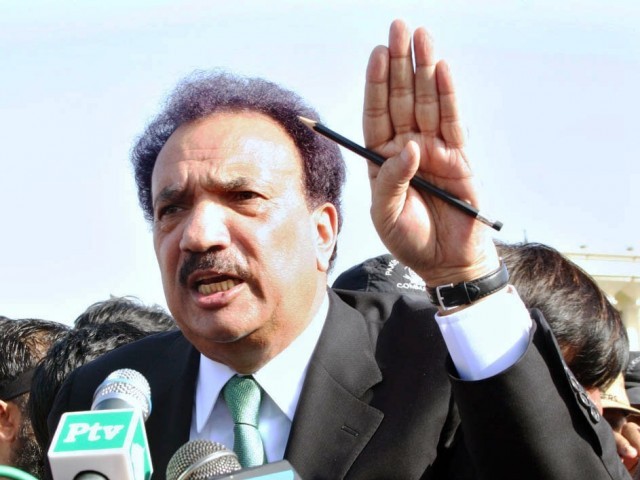 ISLAMABAD: In the continuing war of words between Islamabad and Washington, Interior Minister Rehman Malik once again denied that the Haqqani network was operating from Pakistani soil.

In a tersely-worded rejoinder, Malik  said that the Haqqanis were created and trained by the US’s Central Intelligence Agency (CIA) and may well be based in Afghanistan.

“Let us be pragmatic. If you (US) have any information on the Haqqani network’s presence in Pakistan, share it with us and we will cooperate as we have been cooperating in the past,” said Malik while talking to the media on Sunday.

He said Pakistan had no links with the Haqqani network or any other terrorist group. However, it was a fact that the CIA had produced and trained the Haqqanis and other Mujahideen during the Afghan war, when Pakistan supported them, he added.

“But that was then. Now, Pakistan has no links with Haqqani network which is not based here,” said the minister. “They were sons of the Afghan soil and they were based there as well,” he added.

Elaborating on how Pakistan needed moral support in the fight against terrorism, Malik said “Consider us a part of the solution, not the problem”.

However, his denial of the presence of the Haqqanis on Pakistani soil was contradicted by the militant network itself, which recently warned Washington against any military adventure in North Waziristan’s territory.

Rehman Malik’s heated defense, however, included an explanation of how security at the Pak-Afghan border had been enhanced.

The interior minister also added that security agencies had intercepted and foiled a terrorist plan to target parliamentarians in parliament lodges and to take them as hostages.