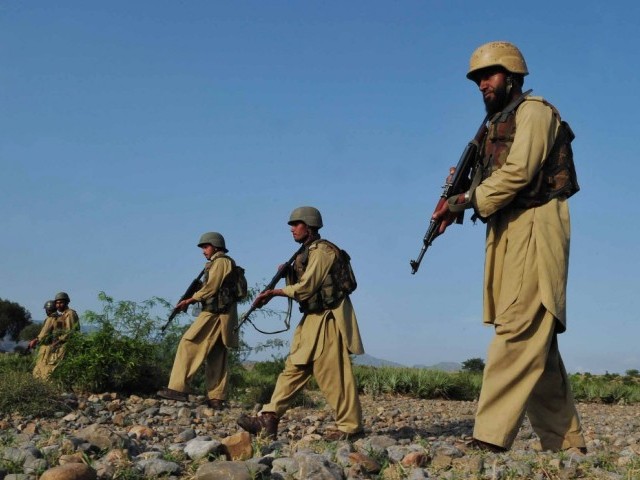 At least 15 militants were killed Saturday in a gunfight with troops in Lower Dir. PHOTO: AFP/FILE

TEEMARGRAH: At least 15 Taliban insurgents were killed in a gunfight with the security forces near the Pakistan-Afghanistan border on Saturday. One security official and a volunteer of a tribal lashkar were also killed in the clash that took place near Kharkai hill in Upper Dir district of Khyber-Pakhtunkhwa.

Dir is the hometown of Maulana Sufi Muhammad, chief of the outlawed Tehreek-e-Nifaz-e-Shariat-e-Muhammadi, whose sons-in-law Maulana Fazlullah and Maulvi Faqir were chiefs of the Tehreek-e-Taliban Pakistan in Swat and Bajaur Agency, respectively.

According to a security official, Saturday’s gunfight started when security forces were approaching a strategic peak to establish a post.

“More than 15 militants were killed in a clash with security forces,” the official told AFP. “One soldier was martyred and three others were wounded,” he said. Another security official confirmed the fighting and casualties.

Dozens of security personnel have been killed in cross-border attacks in Dir and Chitral by Taliban insurgents who have found safe havens in northeastern Afghan provinces of Kunar and Nuristan.

In Orakzai Agency, at least 13 extremists were killed in fresh air raids on Saturday. Security officials said that warplanes bombed hideouts of militants in Arhang, Marghan, Sanzsam, Akun Kot and Balras areas of Upper Orakzai. The claimed that five hideouts of militants were destroyed in the air blitz.

Security forces have marched into Dabori and Khadizai areas where they conducted search operations.

However, security forces are facing stiff resistance from Taliban extremists in Arhang and Marghan areas and therefore they are using air strikes to take out their targets in these areas.