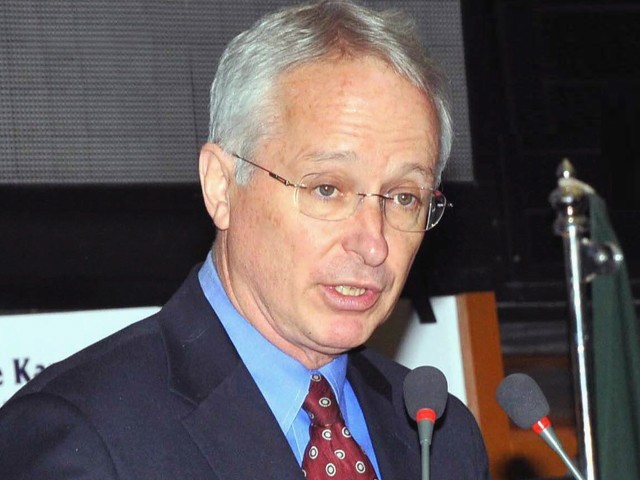 Munter says Haqqani Network was involved in attacks on the US embassy in Kabul recently. PHOTO: FILE

The Pakistan-based Haqqani militant network was behind last week’s Kabul siege and there is evidence linking the group to the Pakistan government, the US ambassador to Pakistan has said.

In blunt comments broadcast by Radio Pakistan on Saturday, Ambassador Cameron Munter said: “Let me tell you that the attack that took place in Kabul a few days ago that was the work of the Haqqani network.

“There is evidence linking the Haqqani network to the Pakistan government. This is something that must stop,” Munter said.

Asked to provide evidence of the link with the Pakistani government, Munter said only “we believe that to be the case”.

Acknowledging that the past year had been “tough”, he urged joint action against terrorism and said the United States and Pakistan were “fundamentally on the same side”.

Munter’s remarks follow a warning by US Defence Secretary Leon Panetta, who said after the Kabul attack that the US would retaliate against Pakistan-based insurgents.

“Time and again we’ve urged the Pakistanis to exercise their influence over these kinds of attacks from the Haqqanis and we’ve made very little progress in that area,” Panetta said Wednesday, a day after the Kabul siege.

“I’m not going to talk about how we’re going to respond. I’ll just let you know that we’re not going to allow these kinds of attacks to go on,” he said.

Pakistan’s foreign ministry condemned those remarks as “out of line”, saying that “terrorism and militancy is a complex issue”.