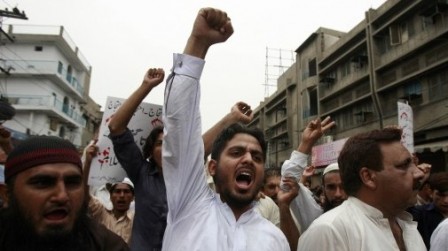 People protesting against the suicide attack at the Data Darbar shrine in Lahore on July 2, 2010. PHOTO: REUTERS

LAHORE: A countrywide strike is being observed today to condemn the Data Darbar tragedy.

Traders organisations have announced a strike while rallies and demonstrations will also be staged in different cities.

On Friday, the Sunni Tehreek took out a rally in Karachi demanding early arrest of the people involved in the attacks. Jamiat-e-Ulema Pakistan, Markazi Jamat-e-Ahl-e Sunnat and Anjuman-e-Sarfaroshan protested in Hyderabad. In Lahore, workers of different religious parties protested outside the shrine.

A religious group, the Sunni Ittehad Council (SIC) advocated violent revenge and announced a shutter-down strike in Lahore for Saturday.

Click the video tab to view the strike situation in different cities.

Amid a chorus of condemnations, the Organisation of Islamic Conference branded the attackers of Data Darbar as “the enemies of Islam”.

The Secretary General of the conference strongly condemned the suicide attacks on the shrine and said those who committed such deplorable terrorist acts were enemies of Islam and humanity.

‘Terrorists should not be linked to one province’