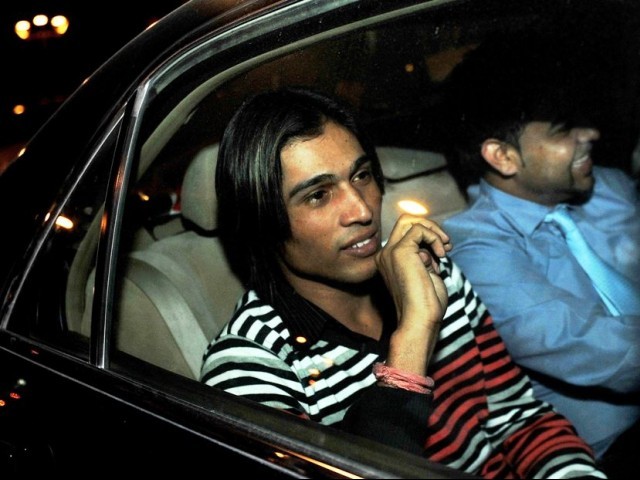 In a startling revelation, over a year after the spot-fixing scandal broke, Pakistani cricketer Mohammad Amir has confessed to bowling deliberate no-balls during a Test match in England. The man accused of setting up the deal, Mazher Majeed, also pleaded guilty.

Amir submitted his written confession in Southwark Crown Court, London, through his British lawyer Gareth Pierce’s firm Birnberg Peirce & Partners. An official confirmed that the statement maintained that Amir was coerced into his actions, rather than acting out of greed. An official from Birnberg Peirce & Partners, when contacted by The Express Tribune, refused to comment further.

Former captain Salman Butt and bowler Mohammad Asif are also accused of involvement, though their statements are yet to be heard. The three players and Majeed are being tried by Britain’s Crown Prosecution Service (CPS).

Having finally changed his line, Amir may be hoping to reduce the length of a possible prison sentence. The three players are charged on two counts. Firstly, with conspiracy to obtain and accept corrupt payments, which falls under the 1906 Corruption Act, and carries a maximum sentence of seven years. They are also charged with conspiracy to cheat, under the 2005 Gambling Act, which carries a two-year maximum sentence.

Details are yet to emerge on the strategy behind Amir’s move. The three players maintained their innocence during hearings conducted by the International Cricket Council (ICC) in Doha in February, only to be found guilty of breaching the ICC’s corruption laws. Amir was banned from all forms of cricket for five years, Asif for seven, and Butt for ten.

The ongoing hearings are part of a criminal case, however, and therefore the prospect of jail, rather than their cricket careers, is at stake. Amir may have been offered a plea bargain. His sentence will now almost certainly be less than it would have been had he pleaded innocence and subsequently been found guilty. It is yet to be seen if Butt and Asif, due to appear in court on October 4, follow suit. While Butt was unreachable, Asif told The Express Tribune that he was “unable to comment since the case is in court.”

The confession is always appreciated by the court, especially in the UK,” a legal expert told The Express Tribune. “Butt and Asif have pleaded not guilty but after Amir’s confession, it has been proved that a crime was committed. The only thing left in the case is to assess the role of each player in the crime.”

The three players were the subjects of a ‘sting’ by The News of the World, a British tabloid, during Pakistan’s tour of England in 2010.

The newspaper revealed video footage of Majeed, who acts as a sports agent among other business ventures, accepting a bribe of £140,000 from journalists pretending to be gamblers. In the tapes, Majeed clearly stated that certain deliveries during Pakistan’s fielding performance would be no-balls.

This information could then be used by gamblers for spot-betting, which is when bets are placed on particular incidents in a match rather than the ultimate outcome.

Amir and Asif, with captain Butt overseeing their movements, delivered no-balls on the deliveries predicted by Majeed in the recorded videos. The newspaper’s evidence seemed comprehensive and damning. Having been passed on to Scotland Yard, who conducted its own further investigations, the players appeared to have no case, a verdict echoed by the ICC. Having lost a significant part of his cricketing career, it appears Amir and his legal team are now, if somewhat belatedly, set on damage limitation.

A CPS spokesperson did confirm to The Express Tribune that the court may take up to three weeks to deliver its verdict on the case next month.