One wishes that more of an effort had been made with the script­writin­g and direct­ing.
By Rafay Mahmood
Published: September 20, 2011
Tweet Email 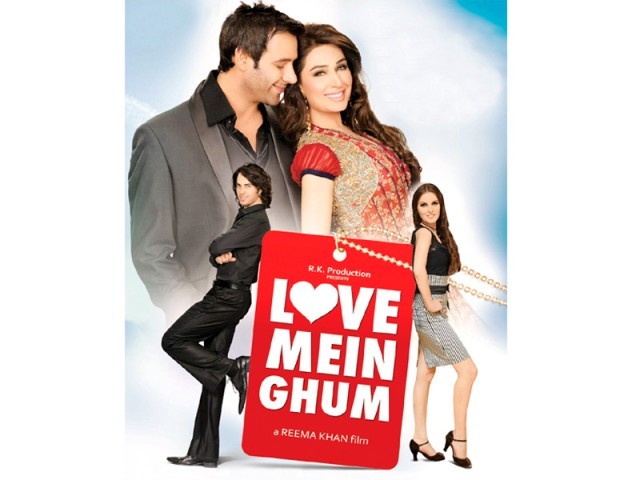 One wishes that more of an effort had been made with the scriptwriting and directing.

Though I reached the theatre mere minutes before the evening show of Reema’s latest offering, Love Mein Ghum, contrary to all expectations, more than half the cinema was available for booking. Reema’s sophomore directorial venture features a star-studded cast: Muammar Rana, Javed Sheikh, Jia Ali, Nadeem Baig, Nabeel Khan, Ali Saleem, Johny Lever, Afzal Khan (Rambo), and, of course, Reema herself in the lead role. But this adaptation of Paulo Coelho’s novel Veronica Decides to Die barely passes as a decent piece of film-making. In fact, only fifteen people stayed till the end of the film, a testimony to the quality of entertainment on offer.

Reema plays a library assistant at a Malaysian university, whose name is Maria Joseph but who, for some odd reason is called ‘Zindagi’. Zindagi is disappointed in love with Wilson (Nabeel Khan), a student at the university, who, despite coming from an English-speaking origin, speaks with a heavy Pakistani. Side by side, Ali (Muammar Rana) is a man whose father (Javed Sheikh) ignores him, choosing instead to shower attention on his wife (a smouldering Jia Ali). After a failed suicide attempt, Ali and Zindagi end up falling in love at a rehabilitation centre where Dr Kanwal (Nadeem) comes to their rescue. The story might seem predictable right now, but to find out how hilariously pointless it is, one actually has to watch the movie. Towards the end, the director raises false hopes of an unexpected twist but that attempt soon peters out.

The film as a whole is under-directed and underperformed with some of the legends of Pakistani cinema being wasted in their roles. There are a couple of perfect long takes in the movie which signify the command Nadeem Baig and Javed Sheikh have over acting; one wishes there was more for them to deliver. Rana no longer has the gandasa and looks good without a huge moustache while the best that can be said about Reema’s performance is that at least she is not dancing around in the fields of Punjab. It seems that while the actors’ attires have undergone transformation, their dialogue delivery and expressions have not moved on. Johnny Lever fails to fake a Sindhi accent, Rambo does a good job of being Rambo and Ali Saleem gives ‘Begum Nawazish’ a film appearance, nothing more than that. The attempted comedy of errors by the three of them doesn’t make sense.

A decent script can be the saving grace of any film; but Love Mein Ghum is replete with bad one-liners accompanied by excessive dialogue where visuals could have easily done the job. The repeated use of the word ‘Zindagi’ with the character’s name does not have the effect intended. The film hits a real low when Zindagi, waking up after her attempted suicide, asks the doctor: “Kia yeh jannat hai?” The music here is as good as bad 80s Bollywood music, although Reema got all the renowned playback singers from Bollywood to sing for this film.

Reema does take Pakistani cinema forward by a baby step with Luv Mein Gum. The film is well-shot and edited, the supporting dancers are beautiful and Reema looks stunning most of the time. But that’s as far as it goes. One wishes that more of an effort had been made with the scriptwriting and directing – then perhaps we would have a truly groundbreaking Pakistani film.

Trapped By Tradition: What’s in a name?