A footballer’s match to the end

A footballer’s match to the end

As thousa­nds of people raise their hands to pray for their favour­ite footba­ll teams in the upcomi­ng quarte­r finals of...
By Natasha Raheel
Published: July 2, 2010
Tweet Email 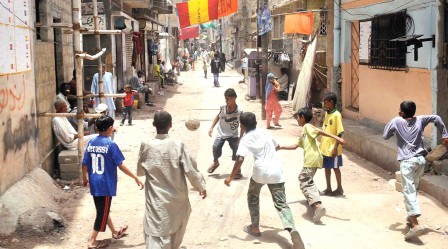 Lyari, where Lal Muhammad learnt how to play the game, remains one of the football hubs in the city. PHOTO: RASHID AJMERI/EXPRESS

KARACHI: As thousands of people raise their hands to pray for their favourite football teams in the upcoming quarter finals of the Fifa, a few prayers are directed at one of Karachi’s football veterans, who lies in the hospital fighting for his life.

Sixty-five-year-old Lal Muhammad is in the Critical Care Unit at the National Institute of Cardio Vascular Disease (NICVD) with multiple tubes entangled in his chest and his voice almost gone. He has a bypass surgery today.

Lal Muhammad, a national footballer from the 1960s, has spent several years in Iran and China and has represented Pakistan in numerous regional and international matches. When Muhammad suffered a heart attack last week, he was admitted to the Jinnah Postgraduate Medical Centre (JPMC) by his sons. While the physical suffering weighed down on the family, so did the financial stress since all seven of Muhammad’s sons are unemployed.

“None of us have permanent jobs,” Muhammad’s son, Amjad, told The Express Tribune, “When we came to the hospital, the administration did not take any notice and our father was kept in the general ward for over five days, where he kept complaining about the chest pains that he was experiencing.”

According to Muhammad’s son, Rafiq Engineer, minister for katchi abadis, and Nabeel Gabol, the minister for ports and shipping, visited the family at the hospital. After the visit, Lal Muhammad was moved out of the general ward to the CCU.

“The real relief, however, is that doctors have stopped asking us to buy medicines from outside,” said Rashid, adding that the NICVD is supposed to provide these medicines for their patients free of cost anyways.

Tracing the history of Lal Muhammad and football

Lal Muhammad started to play football in his younger years in the grounds of Lyari. Football became his passion when he was a teenager and by the age of 20 he decided to move to Dhaka, which was the hub of league football in Pakistan.

Moving from West Pakistan to East Pakistan was not easy. He had to prove his worth in the football market of Dhaka that had inherited its tradition from the sub-continent’s oldest Calcutta-Mohammad club, which has produced football giants like Hafiz Rashid in the 50s.

This was the turning point in the history of the sport in Pakistan. Leaving Bangladesh meant leaving football.

“Muhammad is one of those players who reminds us of the downfall of football in Pakistan,” Pakistan football team’s former coach told The Express Tribune, “Muhammad had played with the Dhaka Wanderers, the club which dominated the football field in the 60s.”

After playing and earning at the Wanderers, Muhammad came back to Pakistan, where he thought he could contribute by making Karachi the centre of football. But like many others, Muhammad went through a period of frustration when, according to him, the selection of the national team was based on discrimination between people belonging to ‘certain’ ethnicities and provinces.

“There was discrimination. I am a Baloch and the people in the federal board were not huge fans of our community,” Muhammad recalls in his hospital bed.

Since there was no central city in Pakistan where football clubs were established and where footballers could play and earn money, the trend was to hire sportspersons in sports departments of different organisations such as Habib Bank, Wapda, Pakistan International Airlines or Pakistan Railways and so on.

Muhammad was fortunate to be employed in the Habib Bank sports department where he worked till 1980. Later on, he coached the HBL team and after 2000, he refereed for many clubs in Pakistan and then he founded his club, Pulpatti Football Club, in Lyari till his heart disease put a stop to his passionate sports endeavours.