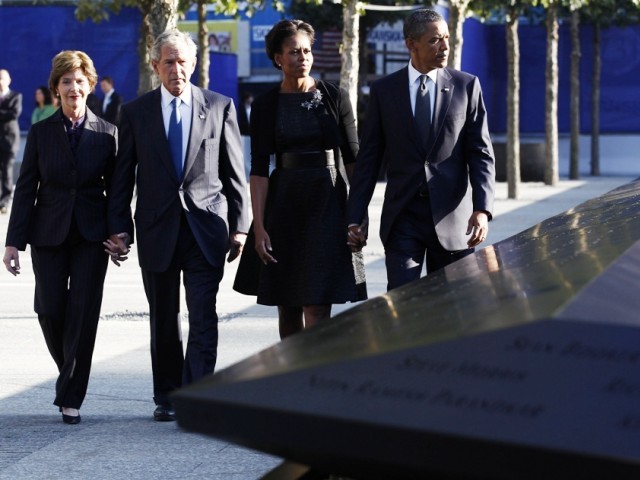 US President Barack Obama and first lady Michelle Obama are joined by former President George W. Bush and his wife Laura Bush during ceremonies marking the 10th anniversary of the 9/11 attacks. PHOTO: REUTERS

NEW YORK: Americans on Sunday remembered the horror of Sept 11, 2001, and the nearly 3,000 people who died in the hijacked plane attacks as authorities worked to ensure the emotional 10th anniversary was peaceful.

Law enforcement authorities in New York and Washington were on high alert against what was described as a “credible but unconfirmed” threat of an al Qaeda plot to attack the United States again a decade after the toppling of the World Trade Center’s twin towers by hijacked airliners.

Security was especially tight in Manhattan, where police set up vehicle checks on city streets as well as bridges and tunnels coming into the city. There was an unprecedented show of force in Manhattan from roadblocks on Times Square in midtown to the area around Ground Zero farther to the south.

Security in lower Manhattan included police barricades on every block near the World Trade Center site with police asking people for identification. People gathered near the site, some clutching American flags, to watch a large screen set up to show a remembrance ceremony here. Some wore T-shirts reading, “Never Forget,” a slogan popular since the attacks.

“It was our Pearl Harbor,” said John McGillicuddy, 33, a teacher from Yonkers, New York, getting coffee and carrying two American flags on his way to the World Trade Center, referring to the Japanese attack that led America to join World War Two.

“Every year, September is always rough,” he said, as he prepared to grieve his uncle, Lieutenant Joseph Leavey, a New York firefighter who died in the south tower on Sept 11.

“Things have gotten better, we are more aware as a country about things going on in the world,” he said.

Family members arrived, wearing T-shirts with the faces of the dead, carrying photos, flowers, American flags and other mementos in an overwhelming outpouring of emotion.

The attacks are now such a part of American life that learning about them is part of the school curriculum. This was the first anniversary which included an American president.

The memorial includes two plazas in the shape of the footprints of the Twin Towers with cascading 9.1 metres waterfalls. Around the perimeters of the pools are the names of the victims of the Sept 11 attacks and an earlier 1993 attack at the Trade Center.

President Barack Obama visited the North Memorial Pool, which sits in the footprint of the north tower. Obama walked around the pool hand-in-hand with First Lady Michelle Obama, former President George W Bush and his wife Laura as an eerie silence fell over lower Manhattan which was devoid of traffic and where construction has stopped for the morning.

In a somber moment, Obama touched the names of the dead, engraved in stone before he greeted some family members and dignitaries ahead of the ceremony where he will read from Psalm 46, which says “God is our refuge and strength.”

The centerpiece of the ceremony is the annual reading of the names of those who died on Sept 11.

Pope Benedict prayed for Sept 11 victims and appealed to those with grievances to “always reject violence as a solution to problems and resist the temptation to resort to hate.”

In the Sept 11 attacks, 19 men from the Islamic militant group al Qaeda hijacked airliners and crashed them into the World Trade Center, the Pentagon outside Washington and a field in Shanksville, Pennsylvania. Just weeks after the attacks, US forces invaded Afghanistan to topple that country’s Taliban rulers who had harbored the al Qaeda leaders responsible for the Sept 11 attacks.

For a Guantanamo survivor, the worst is not over