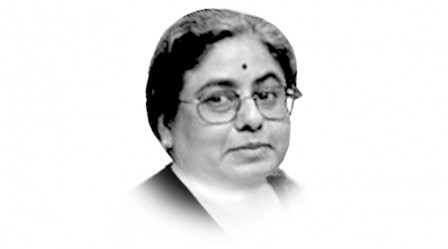 The writer is a political editor at Business Standard, Delhi (aditi.phadnis@tribune.com.pk)

As India battles with internal demons and sets its sights on becoming a respected pole of power in the world, many middle-aged and elderly Indians recalled with pride this week, their struggle against 21 months of fettered democracy in India, from June 26, 1975 to 22 March, 1977. The then Prime Minister, Indira Gandhi imposed emergency rule in India, a constitutional device that permitted the prime minister to legally suspend civil rights, lock up the opposition in jail and seek to fashion a judiciary that was in tune with her ‘progressive ideals’ (her words).

After the India-Pakistan war of 1971 and the creation of Bangladesh, Indira Gandhi sought to turn her triumph into aggressive translation of her ambitions for India. The war hadn’t done the Indian economy much good. Gandhi was dogged by a parliamentary opposition that was bitterly critical of her policies. Poverty and inflation were dragging India down but instead of attacking and dismantling state capitalism, Gandhi did the opposite — sought to strengthen it. One way was to ensure state-run utilities performed: trains ran on time, industrial action like strikes were banned, student politics was prohibited. She thought that by fixing all of this, the Indian people would be grateful. But the ferocious independence of the Indian judiciary, a worldwide environment of protection of civil rights and the average Indian’s pride in democracy, defeated her plans.

The police came at midnight on 25 June, 1975. By the morning most opposition leaders were in jail, many who did not know where their comrades were. Press censorship was put in place and many newspapers ran white spaces where the news should have been with just the word ‘censored’. There were stories of torture in jails, and while the Moscow-leaning Communist Party of India (CPI) wrestled with itself on whether to view the move as ‘people-friendly’ or criticise it as ‘draconian,’ an underground movement started to protest against  the Emergency.

Led by Jayaprakash Narain, the movement sought to bring together on one platform squabbling factions of the Socialist parties as well as the Jana Sangh, an earlier incarnation of the Bharatiya Janata party.

In those days, it was all rather simpler: the good guys were those who worked underground, the bad guys were the ones who justified the Emergency and supported the gagging of the opposition. The omnibus, ideologically diffused Janata party won a landslide victory. But because the only goal was opposition to dictatorship, it also collapsed fairly quickly. The bigger project of reforming and recreating the Indian state remained a dream. Indira Gandhi led the Congress back to electoral victory in 1980.

Today, 35 years later, Indian liberals are wrestling with fresh challenges as they celebrate their 21-month struggle for democracy. Do terrorists and terror groups have civil rights? Isn’t the state structure the most oppressive instrument of a dysfunctional democracy and isn’t this what spawns militants? How should liberal Indians view the admittedly nascent rise of the militant Hindu right?

Even as liberals in India mark the 35th anniversary of the Indian Emergency, they are now confronted with a much more complicated chaotic world. There is, as there always is, an organic connect with that world and this one. But the question is: today, whose rights should you defend?