Fiscal impropriety: If we cross the debt limit quietly, nobody will notice

Fiscal impropriety: If we cross the debt limit quietly, nobody will notice 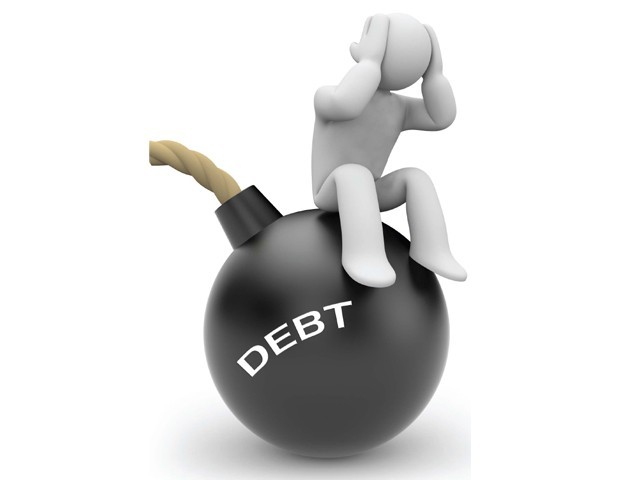 When the United States government approaches its debt limit, it asks its legislature for authorisation to borrow more. The approach by the Pakistani finance ministry appears to be to quietly hide the numbers and hope that nobody notices.

According to data released by the State Bank of Pakistan, the government’s public debt stood at approximately Rs10.9 trillion as of June 30, 2011, which is equal to 60.1% of the total size of the economy. The legal limit, according to the Fiscal Responsibility and Debt Limitation Act of 2005, is 60% of the gross domestic product (GDP).

Finance ministry sources have insisted that the debt limit has not been crossed and that the total debt owed by the government is less than 60% of GDP. It is unclear, however, what they base their calculations on.

The director general of the finance ministry’s debt office refused to comment, when contacted by The Express Tribune. “The media irresponsibly writes about debt issues. I have final figures but I will not disclose them,” said Masroor Qureshi, the head of the debt office.

Despite repeated attempts by The Express Tribune to contact them, officials at the finance ministry refused to comment about the debt office, which has been criticised by economists and even former finance ministry officials for failing to come up with a debt management strategy and mismanaging the government’s debt portfolio.

The official spokesperson for the finance ministry was unable to provide any data that might contradict the information put up by the central bank on its website.

The finance ministry’s most recently published statistics in the 2011 Economic Survey state only cover the national debt up until the end of the third quarter of fiscal year 2010. As of March 31, 2011, the nation’s public debt stood at Rs10 trillion, which would account for about 55.5% of GDP.

Ashfaque Khan, a former head of the debt office and the primary author of the act, says that even though the target had been achieved earlier than its deadline, the government is still bound to not exceed the debt limit of 60% of GDP and must now begin the process of reducing the debt-to-GDP ratio – a measure of the country’s indebtedness – by at least 2.5% of GDP each year, also required by the Act.

The State Bank’s figures go beyond just the government’s debt and include its other liabilities. If those numbers are added in, the government’s total liabilities were just shy of Rs12 trillion at the close of fiscal year 2011, or about 66.4% of GDP.

In this calculation, the SBP includes all debt incurred by state-owned enterprises, all private sector foreign debt that has been guaranteed by the government as well as the debt that the government incurs to finance its commodity trading operations.

Global financial institutions, including the IMF, have repeatedly called on the government for clearer accounting of its total liabilities as well as a plan to ultimately reduce both the debt and the deficit. The finance ministry has so far been unable to come forth with a viable debt reduction plan. Most of the country’s debt is owed to local banks, accounting for 55.4% of the government’s debt.