Food and festivities: What’s Eid without a cake?

Food and festivities: What’s Eid without a cake? 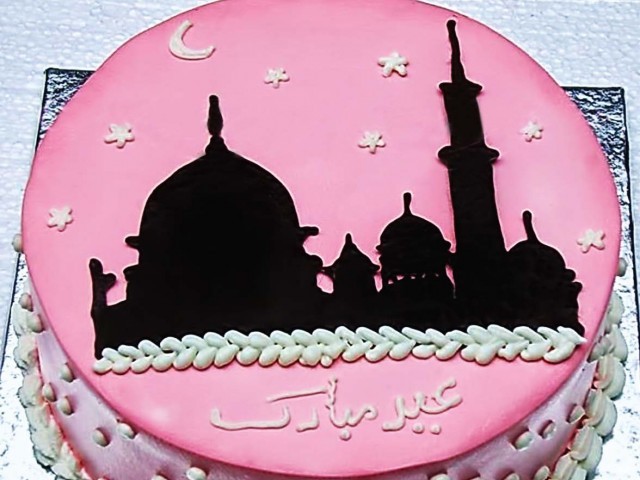 “As Eid approaches, the demand for Eid cakes gets overwhelming. I have already sold 1,800 Eid cakes,” Rabia Faisal, the owner of Redolence Studio told The Express Tribune while talking about her special Eid-themed cakes.

Popular designs include cakes decorated with glittered, bright blue, green or yellow bangles, domes and mosque frescoes, she said. “These patterns have not been marketed on a large scale in Lahore before”, she went on. She said she had also made cakes with prayer mats and rosaries on them on customers’ demands. Sky blue, dust pink, white and off-white are popular colour choices, she said.  She said that corporate and special party orders for Eid had started pouring in by second week of Ramazan. The biggest order she had got was for 650 cakes. Bulk orders come with special discounts, she added.

Rabia, who runs a bakery from a house in Johar Town, says she hopes to sell 1,000 more cakes over the next few days.

She said people’s choices of flavours changed with the seasons. Customers liked fruit cakes in summers and chocolate cakes in winters. “Currently, I am using blueberries and pineapple as these do not sap water into the sponge to make it soggy.” Cakes, she said, are meant to stay fresh for a while.

To meet the big demand for cakes on Eid, Rabia had to hire additional workers. Five new recruits are helping with packaging, baking and icing to meet the large number of orders.

Many clients also want fresh flower décor because that cuts down the cost of buying a bouquet, she said.

Hina, a Redolence customer who ordered 10 cakes for Eid, said that customised cakes were refreshing. Though a bit pricey, she said, it added value to a special occasion.

“Some want 40, some 50. Orders get bigger as Eid days draw closer,” Rina Mohsin, of Rina’s Kitchenette in Defence-X Block, said. Mohsin has not designed special themed cakes this year. She said though business was unusually slow during this Ramazan, she anticipated some orders on Eid.  “Only banks, telecom and textile companies order 50 to 100 cakes. Very few families order more than 10-15 cakes on eid,” she added.  Mango and peach cakes, and desserts such as mango-peach trifle and mocha trifle are some popular choices for this Eid.

Mohkamuddin Bakers in Anarkali have sold some 13,000 Eid cakes already. About 5,000 of 13,000 were customised and sent out of the city, Mohkam Naqvi, the owner of the bakery, said.

He said various patterns preferred on the cakes included mosques and things related to prayer, although some companies ordered their logos to be put on their cakes, he added.