Whatev­er the endgam­e, the Libyan people will pay a heavy price for this war.
By Kiran Nazish
Published: September 4, 2011
Tweet Email 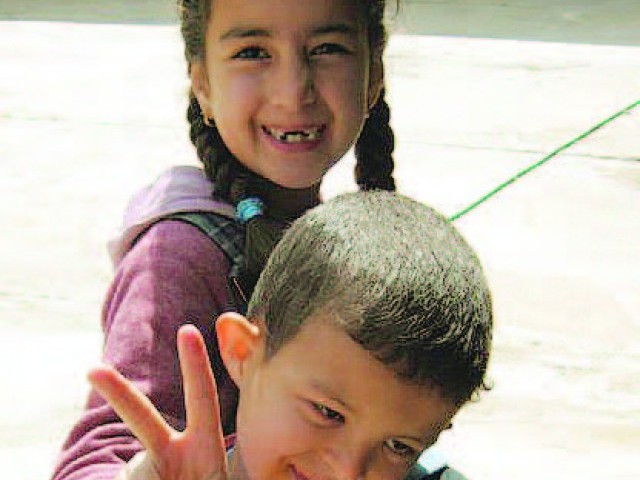 Whatever the endgame, the Libyan people will pay a heavy price for this war.

Hamed Karim has been standing in front of a wall in Benghazi for hours now, staring at the portraits and pictures that cover it. The people in these photos are Libyan rebel fighters and civilians, who were killed or abducted in the rebellion against Muammar Qaddafi’s dictatorial regime. Among hundreds of these framed faces, four images belong to Hamed’s brothers and three to his close friends. As a tear slides down Hamed’s cheek, over 650 kilometres to the west the capital of Tripoli is rocked by explosions as Nato jets bomb Qaddafi’s Bab al-Aziziya compound.

By the time you read this, Qaddafi’s tottering regime may have fallen, and the colonel himself may be dead or in custody or still in hiding. But however the endgame pans out, it will be left to the Libyan people to count the price they paid.

Accurate figures are impossible to get from a war zone, and depending on who you ask, anything from 3,000 to 13,000 lives have been lost. Many times that number opted to flee the country towards Europe, Egypt and Tunisia, with estimates as high as 100,000 — even more if you factor in the immigrant workers who fled the conflict.

“Schools have been closed since February,” says Maimoona, a second year student at the University of Misrata, who managed to escape Libya during the war. Along with other Libyans, Maimoona and few of her family members managed to take a 17-hour boat out of Misrata, to Tobruk.

“It was terrifying, and we didn’t know if we’d be able to make it out. Qaddafi’s forces were shooting any boats they’d catch sight of.” Of the thousands who took to the sea, many were reportedly killed by patrolling loyalist forces. Since Nato joined the war, “things became better”, she says.

For those who stayed behind, survival was difficult. Food stocks were available in Misrata, but were sold at such inflated rates that most people could not afford to buy. But, at least in mostly middle-class Misrata, no one went hungry. In the nearby small towns, populated mostly by low-income families, having enough to eat was a luxury. With business and markets completely shut down, daily-wage earners were the worst hit. It was the network of family and tribal ties that saved them from starvation. “Libyans treat each other like family and are very generous when it comes to sharing food and supplies with those who can’t afford the inflated rates,” says Maimoona. “So as long as you have an extended family which can afford to buy food, you don’t go hungry.”

The real problem was the uncertainty. “Everyone was affected by the war in one way or the other,” says Maimoona.  Many of her friends from university were kidnapped by Qaddafi’s army while many others joined the rebel forces against Qaddafi’s. “My friend’s uncle was abducted in February and no one ever heard back from him. Some of the arrested people were taken to prison from the battlefield, and kept in isolated conditions. But some (very few) managed to flee.”

The lucky ones who managed to escape tell tales of containers being used as makeshift prisons-cum-torture cells. A few prisoners were released after being brutally tortured, in order to serve as a warning for others. It clearly had the opposite effect.

“The people couldn’t watch their loved ones being tortured and killed, and joined the rebel armies to ensure Qaddafi’s defeat,” says Maimoona.

Maimoona’s brother, an X-ray technician at Misrata Hospital stayed back to help the wounded.  “He knew he was not safe, he didn’t know whether he would live through these times, but he wanted to be there in the fight. He wanted to make sure the hospital didn’t lose staff-strength and that no one died due to a lack of staff. So he stayed back to work on, from body to body.” In a wavering voice, she adds, “He wanted to do his part.”

Maimoona and others who escaped Libya, had to struggle to be able to speak to their families in Misrata. Most of the phone lines were down, and those that did work were tapped by the government. “Only journalists were allowed any form of communication. They had satellite phones and the internet.”

Initially, Qaddafi tried controlling people’s minds and the flow of information by giving false reports.  “He constantly lied on national radio and television” about the intrusion of external forces and enemy attacks. Alaa, a Libyan based in Qatar, who was in touch with her family in Zawwiya and Tripoli, explains her shock when she woke one February morning and saw Qaddafi giving a speech blaming ‘anti-state forces’ for causing trouble.

“My uncle had been kidnapped a night before from his own house, by Qaddafi’s army. Qaddafi would tell these lies, but no Libyan would believe him.” Alaa’s father, who speaks to Al-Jazeera regularly about events in Libya, was also under constant threat by the government. Earlier one of Alaa’s other uncles was also killed by the same forces.

Even though the game seems to be up, the possible consequences of Qaddafi’s defeat send chills down the spines of those whose loved ones are missing. “Qaddafi’s forces still have the prisoners and no one else knows where they are hidden,” says Hamza Malik who has been sending updates from Libya via Twitter and Facebook. “I don’t know what he will do to the thousands of prisoners if he becomes desperate.” Indeed, Qaddafi’s unpredictability is in itself a cause for concern. “Qaddafi was always delusional beyond belief,” warns Malik, “and one has to be careful of what steps he may take, as his narcissistic attitude could lead to more lives being lost.” For the rebels, only his capture or death will bring closure. “We will chase Qaddafi from hole to hole,” one injured fighter told the BBC.

As Benghazi was liberated, Libyan political analyst Ana El Gomati struck a note of caution. “There is an immense level of hope, but also a healthy amount of scepticism in the air which means it will be necessary to proceed with caution for the process of nation building to be a successful endeavour. I have attended the funeral prayer of a martyr and with the same people kissed the head of a baby born during the revolution, and so life continues in this incredible city.”

The hard task of rebuilding this war-torn land is a challenge for the immediate future. For the moment, the overwhelming emotion here is relief. Hamza Malik captures the feeling of millions of Libyans when he says, “We will celebrate this Eid as free men, inshaAllah.”

Back on their feet