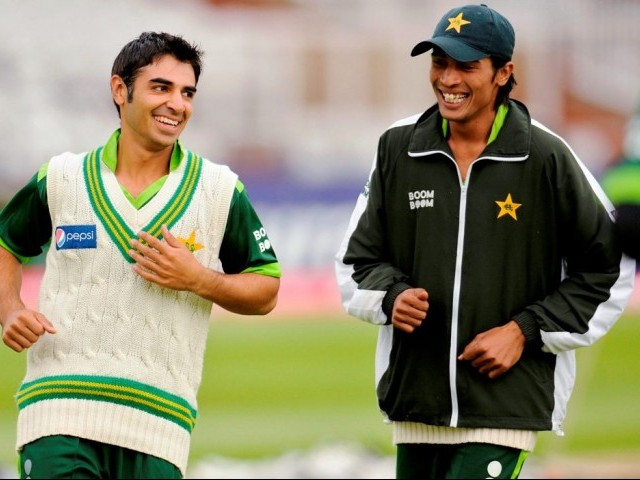 Butt was given a ten-year ban with five years suspended and Amir a flat five-year ban. PHOTO: REUTERS/FILE

KARACHI: A year on from the spot-fixing scandal that ended in long bans for three leading Test players, Pakistani cricket is still struggling to recover.

In late August 2010, Britain’s now-defunct News of the World tabloid alleged that captain Salman Butt and fast bowlers Mohammad Amir and Mohammad Asif had arranged deliberate no-balls for money from an agent during the Lord’s Test against England.

“We were settling in the hotel after coming from the third day’s play when police raided the team hotel, showed us documentation and searched the rooms of the players,” then-team manager Yawar Saeed told AFP.

“It was earth-shattering and I couldn’t believe my ears for the first 20 minutes.”

Pakistan lost the match by an innings and 225 runs the following day as a visibly upset Butt tried his best to hide his shock, and the claims of spot-fixing at the spiritual home of cricket shook the game around the world.

The Pakistan Cricket Board (PCB) pulled the trio from the one-day series which followed and Scotland Yard investigated the players before they were allowed to return home on condition they would return for criminal proceedings.

The International Cricket Council (ICC) went on to suspend them and an anti-corruption tribunal led by senior lawyer Michael Beloff heard their case in Doha in January and February this year.

Butt was given a ten-year ban with five years suspended, Asif seven years with two years suspended and Amir a flat five-year ban, effectively meaning all three will be out of action for five years.

The gifted Amir is still only 19 and could yet make a return to the game, but Butt and Asif will be into their 30s by the time their bans expire, and their international careers appear to be over.

Pakistan have not fared badly since the England tour, drawing a Test series against a strong South Africa side, beating New Zealand away and reaching the semi-final of the World Cup.

But Saeed said Pakistan was still feeling the loss of three star players who could have led the side into the future.

“In Salman we had a young captain who in his first Test as leader defeated Australia and then in Amir we had a world-class fast bowler who even in his early days was lethal,” said Saeed, who quit his post after the scandal-hit tour.

“I still feel they were set up but the fault lies with them and it seems they did it for temporary monetary gains. Even today it’s hair-raising when I remember that incident,” said Saeed, who refused to accept the management could have done anything to prevent what happened.

“We barred their agents coming into their hotel rooms but we couldn’t stop them from talking to someone on the phone. Had we known, we would have taken every possible step.”

Forced by the ICC, the PCB took measures to prevent a repeat in the future, forming an “integrity committee” to look into players’ assets and adding stringent clauses on match-fixing to players’ central contracts.

PCB chairman Ijaz Butt admitted the loss of three key players had been devastating for a cricket-mad country where the game is often a unifying force in adversity.

“Losing three players hurt us badly,” said Butt. “Salman had shown great potential as captain but after that case we had to look around for a permanent captain and it was tough.”

The side suffered yet another blow earlier this month with the surprise resignation of coach Waqar Younis, who stepped down after less than 18 months in charge, citing “personal grounds”.

Captain Misbahul Haq has said the side wants to give Waqar a fitting send-off with a successful Test and one-day international tour of Zimbabwe.

Pakistan have sent a new-look side to the African nation and their fans will hope they bring back brighter hopes for the future.