Pakist­an on Saturd­ay asked India to join hands to defeat forces of terror­ism that want to derail dialog­ue betwee­n the...
By Agencies
Published: June 27, 2010
Tweet Email 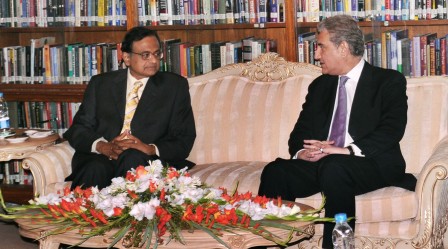 ISLAMABAD: Pakistan on Saturday asked India to join hands to defeat forces of terrorism that want to derail dialogue between the two countries.

“We want to move ahead with full force against terrorism and terrorist organisations,” Foreign Minister Shah Mahmood Qureshi told Times Now, a Mumbai-based news channel, in an interview.

“Terror is hurting Pakistan. We ourselves are victims of terrorism,” he stressed. “We should join hands to defeat the common enemy,” said Qureshi, while stressing that when India suspended dialogue with Pakistan following the November 2008 Mumbai attacks 18 months ago, the only beneficiaries were the terrorists.

“It is in our mutual interest to have tangible progress,’’ said Qureshi, while setting a positive tone for his meeting with India’s External Affairs Minister SM Krishna on July 15 in Islamabad.

“I have full confidence that these meetings will develop into positive outcomes,” he said while alluding to talks between visiting Indian Home Minister P Chidambaram and his Pakistani counterpart Rehman Malik on Friday. “We have to make a beginning and develop a comfort level,” Qureshi.

Meanwhile, Indian Home Minister P Chidambaram has denied having any role in terror activities in Balochistan, saying that although New Delhi sympathises with Islamabad on the terror activities that have taken place, it is a problem which has to be dealt with by Pakistan.

“Balochistan is part of Pakistan and if there is a problem there, it’s entirely up to the Pakistan government to deal with that problem. There is no way in which we can be held responsible. If they tell us how we can help, I’ll listen to them but I can’t imagine how we can help,” Chidambaram told Times Now in an interview.

“Certainly, they are welcome to share that with us. But if sharing intelligence means that we’ll tell them what we have gathered what some people are doing in Pakistan, that would completely compromise our intelligence gathering, isn’t it?” he added.

“We share intelligence with different countries around the world. But there is a difference in that many terror attacks in India emanate from Pakistan and that’s the difference between sharing intelligence with Pakistan and sharing intelligence with other countries,” he said. Asked whether his visit to Pakistan has any historic importance, the Home Minister said being his first visit to the country it has importance for him. “…if this visit followed by the visit of the Foreign Minister (S M Krishna ) can bridge the trust deficit and other deficits that exist, well that’s a good beginning,” Chidambaram added. Agencies

Balochistan Assembly likely to be dissolved