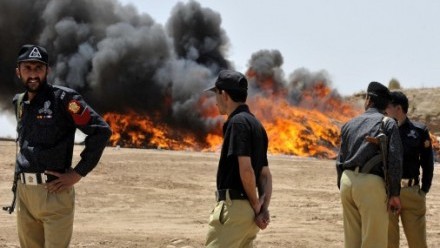 Policemen stand guard beside a burning pile of seized drugs during a ceremony. PHOTO: AFP

LAHORE: The World Anti Narcotics day is being observed today to raise awareness amongst the masses about the seriousness of drug abuse, and to reiterate the commitment to fight the menace.

IG FC attended the drug burning ceremony and said that it is a social responsibility to do all that is possible to stop drug smuggling.

The prime minister announced the initiation of a 5-year Drug Control Master Plan.

He added that Pakistan is a signatory to global conventions and protocols pertaining to the control of drug abuse and illicit trafficking.