The Punjab government, school education department and private school owners appear hesitant to increase weekly holidays in the educational institutions in the province to three due to dense smog.

Provincial School Education Minister Sardar Murad Raas said while speaking to the media that he was not in favour of closure of the schools. He said students should wear mask to protect themselves from the smog.

He said the teachers’ union had also shared the opinion that the school hours should be reduced instead of halting the education for three days a week.

He said the closure of schools for three days would cause a substantial academic loss to the students.

Meanwhile, the smog situation has aggravated in the big cities of the province and is affecting the residents severely.

Meanwhile, Lahore topped the global list of cities with the highest air pollution level on Saturday evening, followed by Delhi and Kolkata in India.

The Punjab government and school education department appear hesitant to close schools due to the smog despite the prevailing situation.

Lahore High Court Justice Shahid Kareem had remarked while expressing concern during a hearing about the smog issue that all schools in Punjab could be closed for three days in a week to handle the situation. 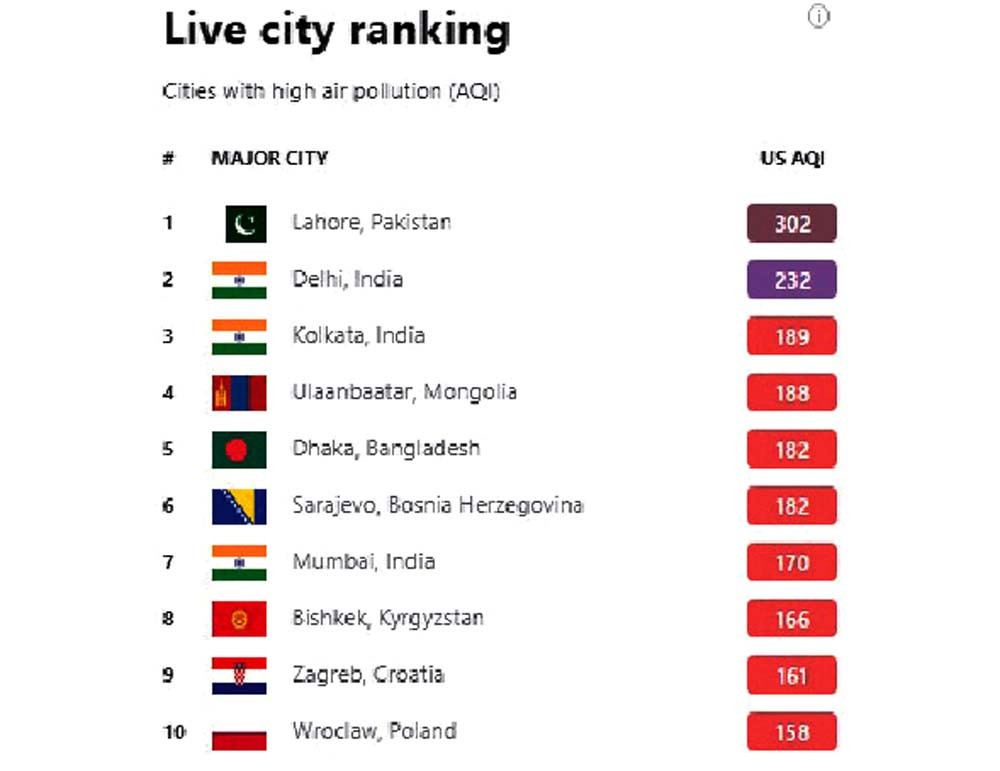 The provincial government is reportedly considering other options like reducing the school hours, a suggestion reportedly favoured by the stakeholders of the education sector.

The school education minister said every effort would be made to continue academic activities in the schools so that the time of the students should not be wasted.

“We want the school timing to be revised. Higher levels of smog and pollution are experienced in the morning when thousands of vehicles come onto the roads,” he added.

He said that that instead of opening schools at 8am, they should be open at 9am and closed at 10pm.

The said the students were already suffering due to a shortage of teachers in the schools and increasing the holidays would make more difficult to cover he whole syllabus during the academic session.

All Pakistan Schools Management Association president Kashif Adeeb Jawadani complained that the owners of private schools were not consulted whenever the government prepared a strategy to cope with smog.

“They are not consulted even over the issue of closure of schools. However, we are not in favour of keeping the schools closed and we would prefer that the educational activities continue for six days a week with reduced daily working hours so that we can avoid loss of time for the students,” he said.

An official of the environment protection department conceded while speaking to The Express Tribune that the departments concerned had failed to adequately handle the smog situation. He said the citizens were now facing problems because of the smog.

The official warned that avoiding closure of the schools for more days could cause an increase in the number of patients received by the hospitals because of the high pollution level.

The problem has already reached an alarming level in Lahore and several other big cities of the province.

Patients with eye diseases, chest infection, breathing issues and allergy are visiting hospitals in large numbers and a major proportion of them are school, college and university students affected by the smog.

The number of elderly people being treated in the outpatient departments of hospitals has also increased along with the aggravation of the smog level.

A health expert advised the people to avoid going outdoors in the coming days and wear masks to protect themselves from the effects of pollution.