US unveils high-tech B-21 stealth bomber

Even the most sophisticated air defence systems will struggle to detect the B-21 in the sky, says defence secretary

The B-21 Raider is unveiled during a ceremony at Northrop Grumman's facility in Palmdale, California on December 2, 2022. PHOTO: AFP

The United States on Friday unveiled the B-21 Raider, a high-tech stealth bomber that can carry nuclear and conventional weapons and is designed to be able to fly without a crew on board.

The slickly choreographed ceremony at B-21 manufacturer Northrop Grumman's facility in Palmdale, California opened with the US national anthem as older bombers roared over a crowd that included top US officials.

Unveiled today, the B-21 Raider will be a dual-capable, penetrating-strike stealth bomber capable of delivering both conventional and nuclear munitions. The B-21 will form the backbone of the future Air Force bomber force consisting of B-21s and B-52s.(U.S. Air Force photo) pic.twitter.com/X6KSU7sy6U

Dramatic music played and lights flashed as the doors of a hanger holding the new aircraft slowly opened, and the crowd applauded as the cloth covering it was pulled away to reveal a sleek grey bomber that is on track to cost nearly $700 million per plane.

"The B-21 Raider is the first strategic bomber in more than three decades. It is a testament to America's enduring advantages in ingenuity and innovation," US Defence Secretary Lloyd Austin said in remarks at the ceremony.

.@SecDef: [The @USAirForce’s B-21 Raider is] proof of the Department’s long-term commitment to building advanced capabilities that will fortify America’s ability to deter aggression, today and into the future. pic.twitter.com/93ahmw90Ar

Many specifics of the aircraft are being kept under wraps, but the plane will offer significant advances over existing bombers in the US fleet, which Austin highlighted in his remarks.

He hailed its range — "no other long-range bomber can match its efficiency" — and its durability, saying it is "designed to be the most maintainable bomber ever built”.

Like the F-22 and F-35 warplanes, the B-21 features stealth technology, which minimises an aircraft's signature through both its shape and the materials it is constructed from, making it harder for adversaries to detect.

"Fifty years of advances in low-observable technology have gone into this aircraft," Austin said. "Even the most sophisticated air defence systems will struggle to detect the B-21 in the sky."

The plane is also built with an "open system architecture," which allows for the incorporation of "new weapons that haven't even been invented yet," he said.

Amy Nelson, a fellow at the Brookings Institution think tank, told AFP ahead of the unveiling that the B-21 is "designed to evolve." 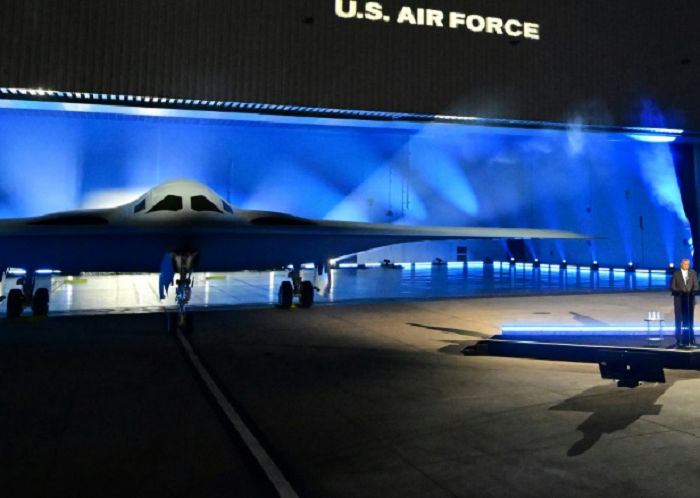 "The 'open architecture' allows for the future integration of improved software (including for autonomy) so the aircraft doesn't become obsolete as quickly," she said.

"The B-21 is much fancier than its predecessors — truly modern. Not only is it dual-capable (unlike the B-2), which means it can launch nuclear or conventionally armed missiles, it can launch long- and short-range missiles," Nelson said.

Not mentioned during the ceremony was the plane's potential for uncrewed flight. US Air Force spokesperson Ann Stefanek told AFP the aircraft is "provisioned for the possibility, but there has been no decision to fly without a crew."

The first flight by a B-21 — "the backbone of our future bomber force" — is expected to take place next year, and the Air Force plans to buy at least 100 of the aircraft, Stefanek said.

Northrop Grumman said six of the planes are currently in different stages of assembly and testing at its facility in Palmdale.

The bomber will be a key part of the US "nuclear triad," which consists of weapons that can be launched from the land, air and sea.

"For nuclear deterrence, the bomber fleet provide flexibility to US nuclear posture, and redundance should any of the other legs fail," Nelson said.

The "Raider" portion of the aircraft's name honours the 1942 US bomber raid on Tokyo led by then-lieutenant colonel James Doolittle — the first American strike on Japan's homeland following the surprise attack on Pearl Harbor the previous year.

"On a cold and rainy April morning, four months after Pearl Harbor, 16 US Army bomber planes took off from an aircraft carrier in the Pacific," Austin said.

They "flew more than 650 miles to strike distant enemy targets, and the Doolittle Raiders, as they came to be known, showed the strength and the reach of American air power," he said.

Bomber blows himself up; no casualties

'Bomber' killed in blast near DC office in Jamshoro

Body found at Frankfurt airport in undercarriage of aircraft from Tehran