In the latest twist of events surrounding the threatening speech against a woman judge, a magistrate in Islamabad has issued warrant of arrest against former prime minister and Pakistan Tehreek-e-Insaf (PTI) Chairman Imran Khan.

The case against the former prime minister was registered on August 20 with the Margala Police Station in the federal capital over his remarks at a rally in F9 Park where he warned Additional District and Sessions Judge Zeba Chaudhry and police high-ups of dire consequence, as well as the judiciary for what he had called its “biased” attitude towards his party.

The magistrate issued the arrest warrant on the request of the police on Saturday for not following the case. Imran was booked in a terrorism case on the complaint of Islamabad Saddar Magistrate Ali Javed for threatening the judge. 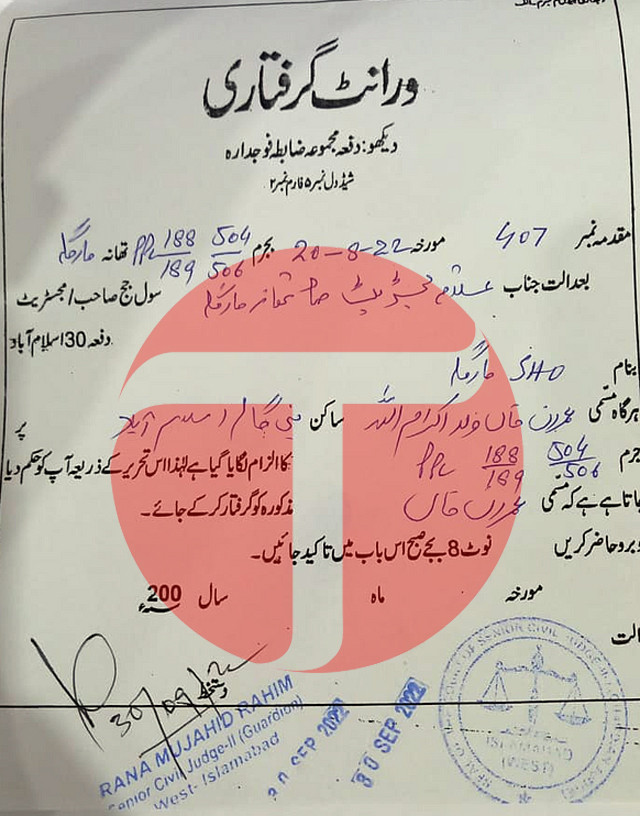 As the news spread, PTI workers started congregating at Imran’s Bani Gala residence. The workers also came out in different cities of the country to warn the government against arresting their leader.

The police said that rumours were being spread of a 300-member force being sent to Bani Gala. “There is no truth in this news and it is baseless,” the Islamabad police said. It requested citizens to not “listen to propaganda”.

Islamabad police explained the issuance of the warrant was a “legal process”.

The police said that after the Islamabad High Court struck down terror charges from a case registered against Imran for his remarks, the case was transferred to a sessions court and the PTI chief had not obtained his bail from there.

The police said he had also not attended the last court hearing on the matter and the arrest warrant was thus issued to ensure his presence.

“It is a bailable crime. There is no question of arrest,” the interior minister said.

The warrants came to light hours after the PTI chief submitted an affidavit in a contempt case against him in the Islamabad High Court, saying he had realised he “might have crossed a line” in his criticism of Chaudhry and was willing to apologise to her “if she got an impression” that he had crossed a line.

The court had sought the affidavit during a hearing on September 22, when Imran had offered to tender an apology to Chaudhry, who had earlier caught flak from the PTI supremo after approving his close aide Shahbaz Gill’s physical remand in a sedition case. Imran’s offer to apologise had seen him escape the indictment.

The first information report (FIR), a copy of which is available with The Express Tribune, was lodged with the Margalla police following a speech of Imran Khan at the PTI rally at the federal capital’s F9 Park in August.

The FIR also carried Section 7 of the Anti-Terrorism Act.

However, the Islamabad High Court (IHC) on Sep 19 ordered removal of terrorism sections from the case registered against the PTI chief for threatening the woman judge and officials of Islamabad police.

Subsequently, an Anti-Terrorism Court directed Imran to approach the sessions court for interim bail as the matter did not fall in its jurisdiction after the Islamabad High Court (IHC) dropped terrorism charges against him.

The capital police had registered FIR No: 407 on August 20, against Imran under sections 504/506 and 188/189 for threatening the woman judge and officials of the Islamabad police.

In the affidavit, the former premier assured the court that he would never do anything in future that would hurt the dignity of any court and the judiciary, especially the lower judiciary.

The PTI chief also said that he will fully follow what he said before the court in the last hearing and added that he is ready to take further action to satisfy the court in this regard.

The deposed premier further said that he is "willing to apologise" if the judge thinks that he crossed a "red line".

"The deponent (Khan) never intended to threaten the judge [...] and that there was no intention behind the statement to take any action other than legal action," the affidavit reads.

Imran said that he assures the court that he is willing to explain and clarify before the female judge that neither he nor his party sought any action against her.

"...the deponent is willing to apologise to the judge if she got an impression that the deponent had crossed a line," the PTI chairman stated.

He assured the IHC that he would "never do anything in future" that would hurt the dignity of any court and the judiciary, especially the lower judiciary.

The PTI chairman added that he is willing to take any further steps that the IHC deems necessary and that he never intended to interfere with the process of the court or impugn the dignity or independence of the judiciary.

The former chief executive said that he stands by his September 22 statement and "once again assure[s] this court that he would always abide by the afore-referred statement, in letter and spirit".

The hearing of the case will take place on October 3, when IHC will review Khan's response.

On Friday, the PTI chairman had visited the sessions court of Islamabad in order to tender an apology to the additional district and sessions judge, but finding her on leave, he asked her reader to convey his apology to her.

When Imran reached the courtroom, the staff present there informed him that the ADSJ was on leave. He asked the reader to convey his message to “Madam Zeba” that “Imran Khan has visited her to apologise if his words hurt her sentiments”. He then left the courtroom.