While fans were overjoyed by Jolie's arrival in Pakistan, they felt betrayed as Pakistani artists go for an award show

Hollywood star and humanitarian Angelina Jolie has said the flood disaster in Pakistan should be a “wake-up call” for the world regarding climate change, calling for more international aid after meeting with victims. While the fans were overjoyed by Jolie's presence in Pakistan, they felt betrayed as a number of Pakistani artists were off to Canada for the HUM Award show.

“I’ve never seen anything like this,“ said Jolie, who previously visited Pakistan to meet the victims of the devastating 2010 floods and a deadly 2005 earthquake, in footage released on Thursday. “I am absolutely with you in pushing the international community to do more... I think this is a real wake-up call to the world about where we are at,“ she told a meeting of civil and military officials in the capital Islamabad. “Climate change is not only real and it’s not only coming, but it’s also very much here.”

Jolie's visit to Pakistan raised some concerning questions when it came to the stance of our local celebrities. While the Wanted star has been visiting flood-hit areas, the likes of Sharmila Faruqi and former actor Noor are calling out Pakistani artists for making a trip to Canada to attend a local award show.

Sharing a collage of pictures from Jolie in Dadu and local artists in Canada, Faruqi penned, "Here is Angelina Jolie visiting our worst flood-affected district Dadu, spreading love & hope, and appealing to the international community to come for our help. In sharp contrast to this, our Pakistani shining stars are all in Toronto for awards, making merry and ready for some scintillating performances."

She went on to add, "Not a single one of them even bothered to visit any flood-affected area or show any solidarity in cash or kind except for Hadiqa Kiani. Though I truly believe in cultural activities, award shows, performances, etc, promoting our talent and our artists and actors are second to none. But It would have been great support if all of them had reached out to their fellow countrymen who have lost their homes, lives and livelihood to the devastating floods."

Adding how "there is a time for everything, to celebrate, to mourn", the PPP leader added, "We have a humanitarian crisis in our country, this is the time to stand by them, with them, to hold, support and love them. Each one of us has a responsibility towards our nation and its people who have given us so much. It’s payback time."

Noor, too, shared similar sentiments. "Watching Angelina Jolie visit Pakistan is embarrassing when our so-called celebrities, who reach every mall and dance on every street for promotional events of their upcoming projects, are nowhere to be seen. Hadiqa Kiani and Resham are exceptions," shared the former actor. 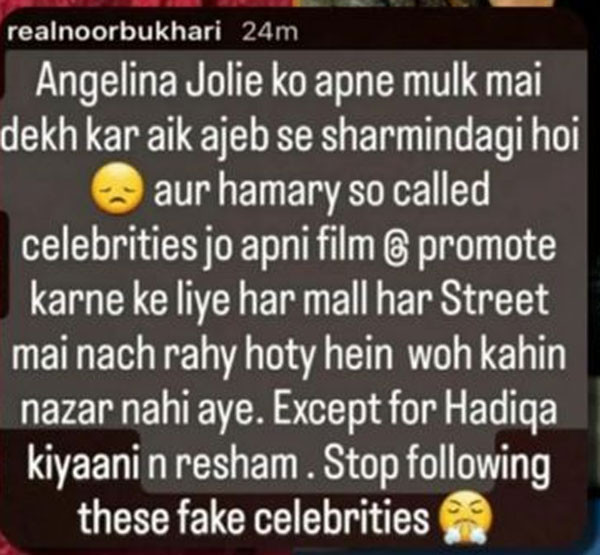 Some Twitter users too called out the celebs for flying to Canada. "Angelina Jolie is better than all paki celebs," a user shared. "Our so-called celebs are so in discord with what's happening in Pakistan. A few years back none of them voted in elections because they were attending awards in Canada. This time, half the country is drowned in floods and they chose some Hum TV awards."

Angelina jolie>>> all paki celebs
Our so-called celebs are so in discord with what's happening in Pakistan.Few years back none of them voted in elections cos they were attending awards in Canada. This time,half the country is drowned in floods and they chose some hum tv awards. https://t.co/gdzG3FLs8q

Another added, "We have Angelina Jolie visiting flood-affected areas to raise awareness about the devastation and then we have our local celebs who have gone to Canada for Hum awards apparently. Priorities. Sigh."

We have Angelina Jolie visiting flood affected areas to raise awareness about the devastation and then we have our local celebs who have gone to Canada for Hum awards apparently.. Priorities...... Sigh .

One tweep shared, "Angelina Jolie is in Pakistan on a relief mission for the flood victims. Whilst Pakistani celebrities are in Canada for some award shows. Priorities. Btw, Pakistani celebs who diligently attended Imran Khan jalsas are yet to visit a flood relief camp."

Angelina Jolie is in Pakistan on a relief mission for the flood victims. Whilst Pakistani celebrities are in Canada for some award shows. Priorities. Btw, Pakistani celebs who diligently attended Imran Khan jalsas are yet to visit a flood relief camp. https://t.co/2KgyKed3w8

Another user added, "Angelina Jolie is in Pakistan to support flood victims while our celebs are travelling to Canada for a freaking awards show."

Angelina Jolie is in Pakistan to support flood victims while our celebs are travelling to Canada for a freaking awards show. #FloodsInPakistan pic.twitter.com/ZeFPxkZRNo

Angelia jolie is here for flood relief campaigns and are very own celebs are off for award preps. WOW

While Pakistani Celebs(actors/actresses) are busy in dancing for Hum Awards, International Star Angelina Jolie came to Pakistan for help of Flood affectees. Shame on these Pakistani celebs. 😤 disgusting #AngelinaJolie #FloodsInPakistan

However, it is pertinent to mention here that Hum TV had previously announced a percentage of the ticket sales would be donated to the flood affectees.

It is also important to add that several local artists have contributed to the flood relief mission. Hadiqa Kiani has been helping with her Vaseela-e-Raah campaign to provide goods to the affectees and rebuild flood-hit villages. Anoushey Ashraf, Natasha Baig, Dino and Azekah Daniel, too, visited Sindh and Balochistan areas to raise awareness of the severity of the situation.

Apart from this, Uzair Jaswal’s concert in Islamabad was arranged so funds could be sent to the victims. Mohsin Naveed Ranjha, HSY among other designers have shared a sum of their latest collections with the relief fund. Meera and Hira Mani arranged shows to raise funds for the flood relief campaign. 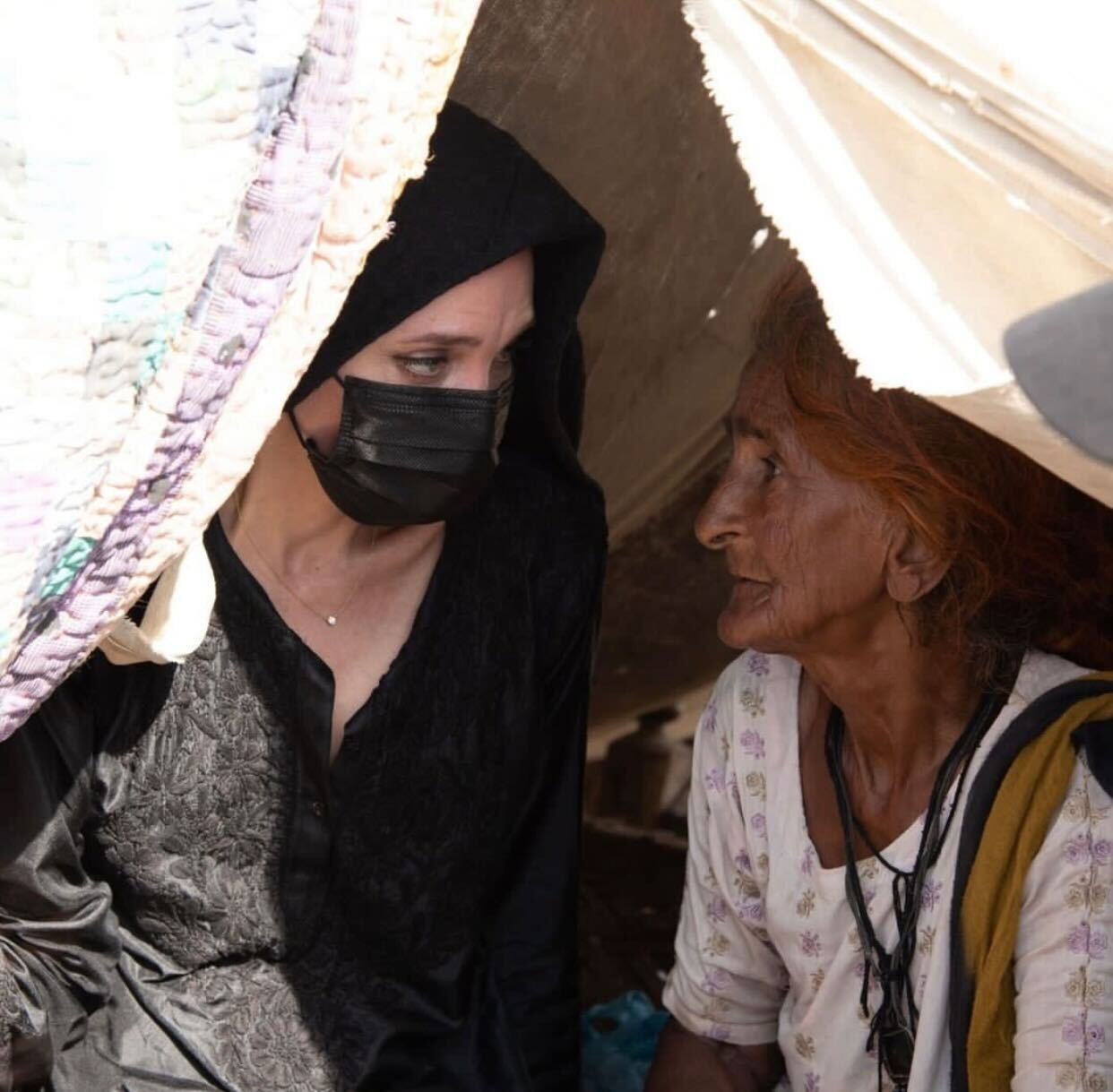 Jolie said that the flood devastation in Pakistan was a wake-up call for the entire world. "Climate change is not only real and it is not only coming, it is here," she warned. "Even as somebody who has been in humanitarian aid for many years we think of crisis on how to solve it and what can we do in order to help rebuild or help the children. Now we're in a situation like this where the needs are so great and truly every effort means life or death for so many people."

"I've seen the lives that were saved but I've also seen... I've been speaking to people and thinking that if enough aid doesn't come they won't be here in the next few weeks... they won't make it," she added.

Jolie said that she is in Pakistan as a friend. "I will return and continue to return and my heart is very, very much with the people at this time," she further said. She urged the international community to send more aid to help flood victims in Pakistan. "I keep thinking that if more help does not come quickly, they will not make it."

The Express Tribune has reached out to Hum TV PR representative for a statement but couldn't get a response.