Is the Covid-19 pandemic 'over'? Biden's bold declaration raises questions

Singer Aima Baig has found herself in hot waters after a British model accused her of cheating with her ex-boyfriend, Qes Ahmed while being engaged to actor Shahbaz Shigri.

The news of Ahmed and Baig's alleged romance broke when Taloulah Mair took to Instagram and called out the Pakistani singer for having an affair with her boyfriend. Mair's main Instagram account, which has now been disabled, shared how Ahmed had cheated on her multiple times including with Baig.

"It was actually Aima Baig, the girl he was actually cheating on me with," Mair shared on her Instagram story. "He's [Ahmed] is actually not a very thoughtful person, but I am. So, one of the first presents I ever bought him was a personalised Zippo. That was really meaningful for me. Fast forward a few years and when he went to Dubai to meet Aima, they were staying together and she flew him out. They were having a great time and you know what was the gift he bought for her? A personalised Zippo," Mair alleged.

In another story, Mair said, "This will get a lot more attention because this lady is quite famous in Pakistan or as Qes delicately put it while he was gloating about cheating on me, 'One of the most famous women in Pakistan.'" 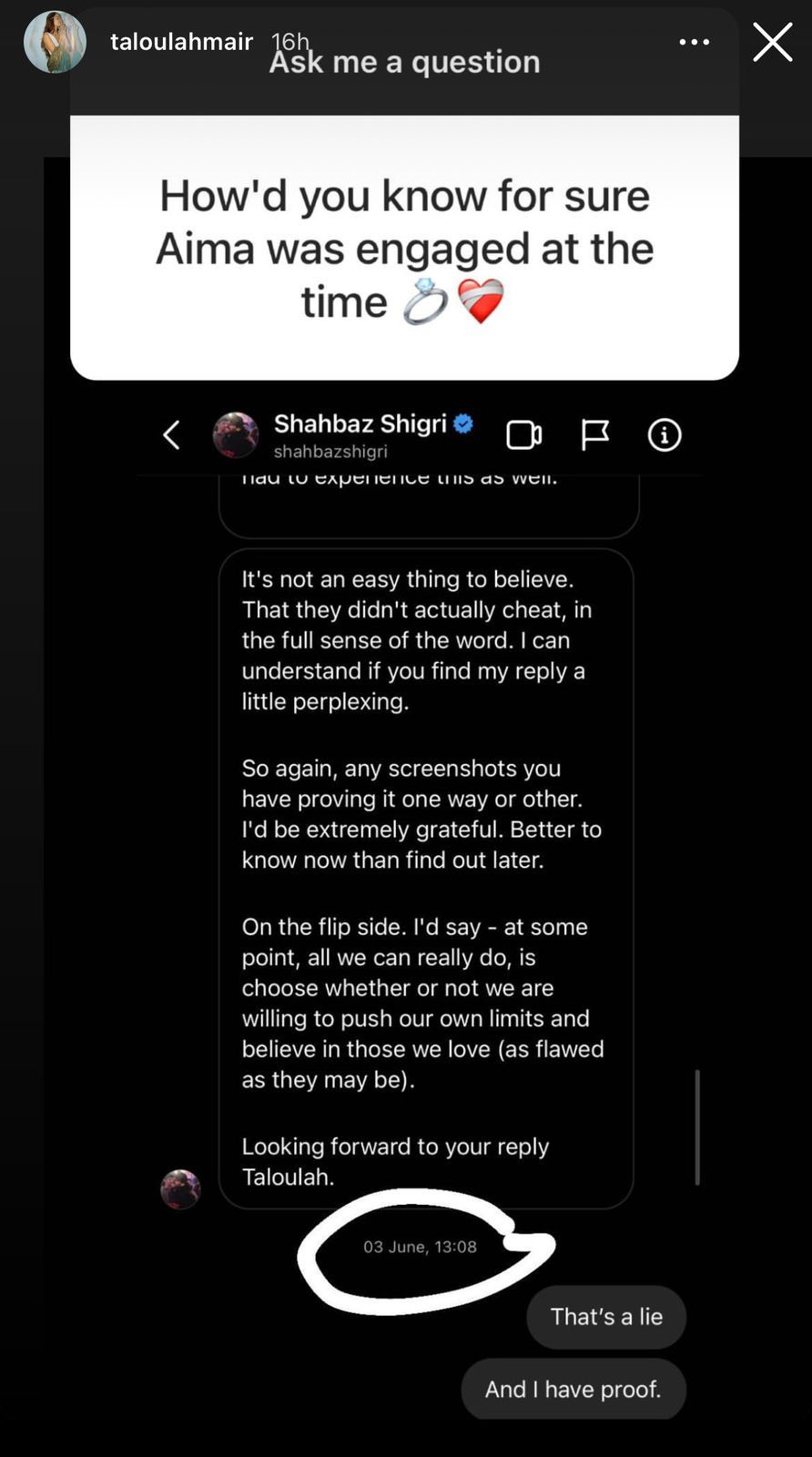 She then went on to share an apparent screenshot of her and Shigri's chat. In the said screenshot, the actor shared that it is not an 'easy thing to believe that they [Ahmed and Baig] didn't actually cheat in the full sense of the word.' The screenshot further read Shigri allegedly asking for further screenshots. "I'd be extremely grateful," he had apparently written to Mair. "Better to know now than to find out later." He supposedly added, "On the flip side, I'd say - at some point, all we can really do, is choose whether or not we are willing to push our own limits and believe in those we love (as flawed as they may be)."

Ahmed, after Mair's accusations, took to Instagram and shared his side of the story. "I've been made aware that a woman from my past has been saying some out-of-order things about me. She's accused me of stealing from her and is reaching out to people I know without context screenshots and false facts," he wrote. "Earlier this year, she did a very similar thing where she reached out to my clients with the same story. She then demanded I pay her 10,000 Euros and after much frustration upon advice from my family, I decide to pay it in order to achieve peace." 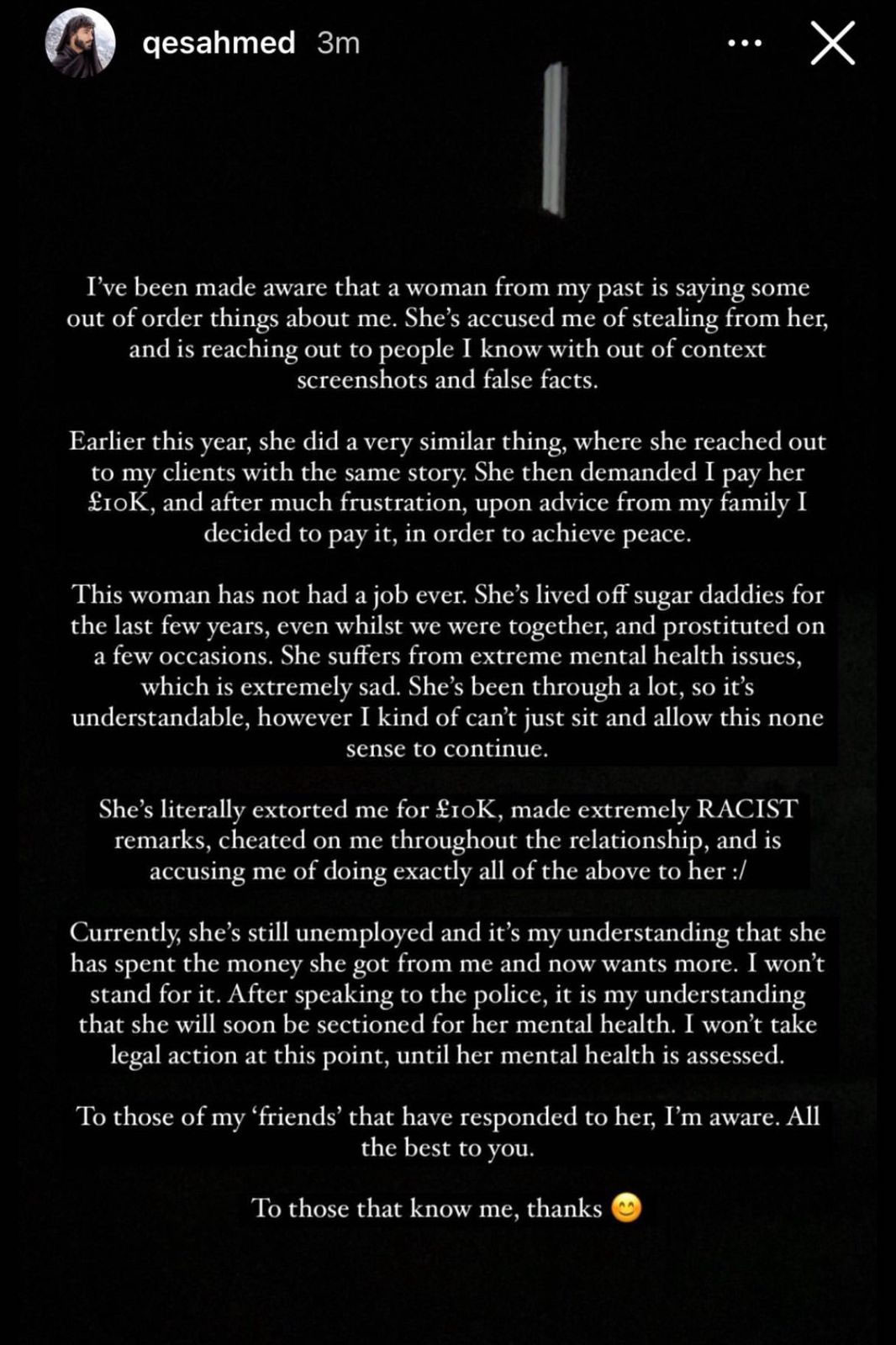 Ahmed went on to accuse Mair and added, "This woman has not had a job ever. She's lived off of sugar daddies for the last few years, even whilst we were together." He commented how Mair suffers from "severe mental health issues, which is extremely sad." Ahmed further shared, "She's been through a lot so it's understandable, however, I can't just sit and allow this nonsense to continue. She's literally extorted me for 10,000 Euros, made extremely racist remarks, cheated on me throughout the relationship and is accusing me of doing exactly all of the above to her."

Accusing how Mair is currently unemployed and has spent the money she had 'gotten from Ahmed', he penned, "I won't stand for it. I won't take legal action at this point until her mental health is assessed." 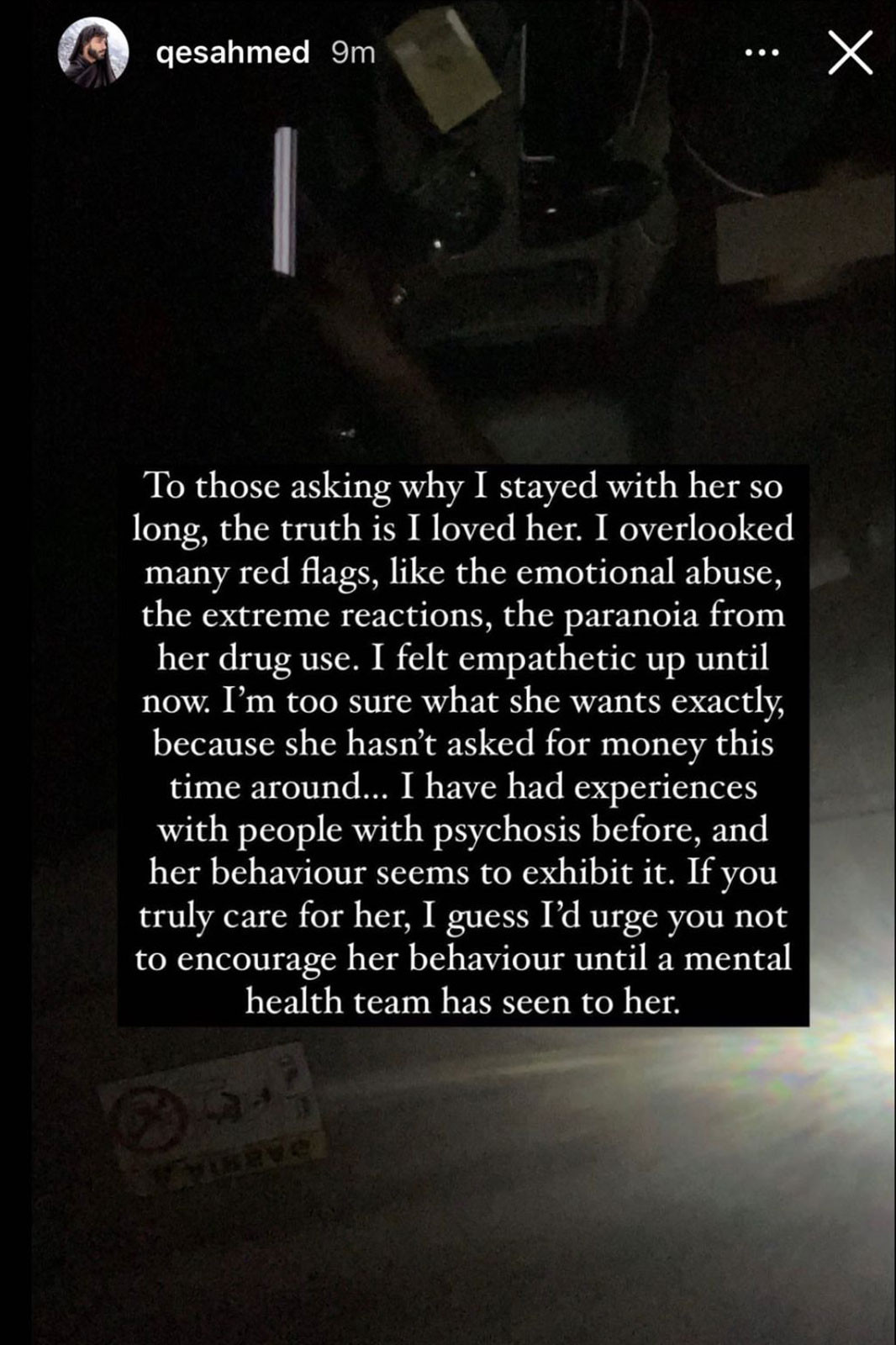 In another Instagram story, Ahmed wrote, "To those asking why I stayed with her [Mair] for so long, the truth is I loved her. I overlooked many red flags, like the emotional abuse, the extreme reactions, and the paranoia from her drug use. I felt empathetic up until now. I'm too sure what she wants exactly because she hasn't asked for money this time around. I have had experiences with people with psychosis before and her behaviour seems to exhibit it. If you truly care for her, I guess I'd urge you to not encourage her behaviour until a mental health team has seen to her."

Both Shigri and Baig have not addressed the matter. The Express Tribune has reached out to Baig's management for a statement and is currently awaiting a comment.

Last week, the Coke Studio singer had confirmed that she and Shigri had parted ways after a year-long engagement. "Yes, I will always respect this person for giving me a good time," Baig shared in a statement on social media. "Sometimes, sh*t happens for a reason. And to answer all your questions, yes we have parted ways. But we are both doing good and fine, so don't worry." 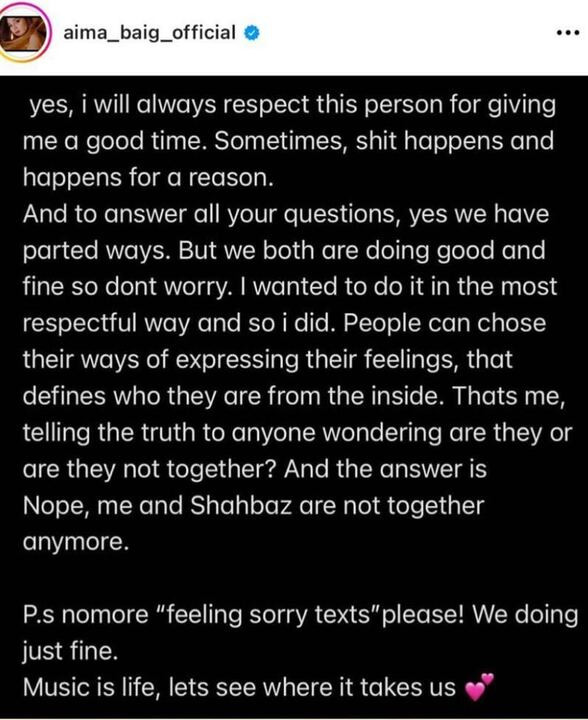 The singer added, "I wanted to do it in the most respectful way and so I did. People can choose their ways of expressing their feelings, which define who they are from the inside. That's me telling the truth to anyone wondering if they are or they are not together. And the answer is, nope. Me and Shahbaz are not together anymore." she had concluded her statement with, "PS: No more 'feeling sorry texts' please! We are doing just fine."