Two die in accidents in Thikriwala

The government on Monday increased the price of petrol by Rs6.72 per litre and reduced that of high speed diesel (HSD) by Rs0.51 and kerosene oil by Rs1.67 per litre effective from August 16 (today).

The government increased the price of light diesel oil (LDO) by Rs0.43 per litre.

Earlier, the coalition government had reduced the price of petrol by Rs3.05 per litre and that of LDO by Rs0.12 per litre from August 1.

However, it had increased the price of HSD by Rs8.95 per litre and kerosene oil by Rs4.62 per litre effective from August 1, 2022.

The price of kerosene oil has come down to Rs199.40 per litre from Rs201.07 per litre.
In the past, the sharp devaluation of the rupee against the dollar had also been a major factor in determining oil prices.

In recent days, the position of the rupee had strengthened against the dollar. Despite that, there had been an increase in the price of petrol. And, there had not been any major cut in the price of diesel which is widely used in agriculture and transport sectors in the country. 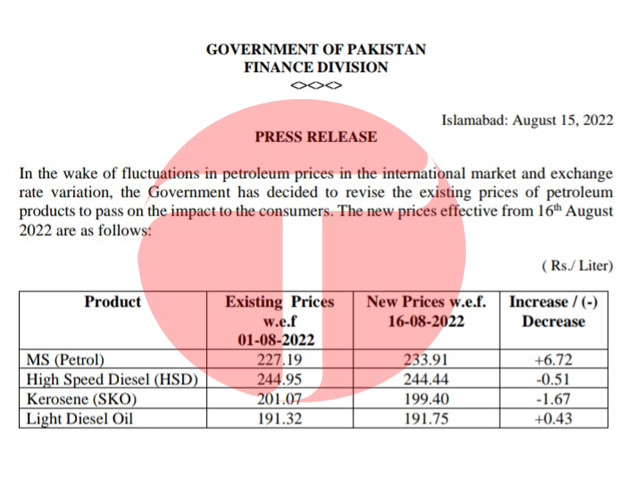 As the HSD is mainly used in agriculture and transport sectors, reduction in its prices will have a direct inflationary impact on the life of the masses. The farmers are already facing high prices of electricity and the reduction in price of HSD might cause some relief in the cost of doing business.

The price of HSD is already at a high level. The fresh nominal reduction in its price may not have a major impact on the transport and agriculture sectors that are directly linked to activities of farmers and the people.

Due to hike in the price of diesel, transport fares have already gone up, resulting in higher prices of commodities in the country.

Petrol is used in motorbikes and cars. Its alternative is compressed natural gas (CNG). The CNG retail outlets in Punjab have been operating on imported liquefied natural gas (LNG) and the cost of it has gone up manifold due to Russia-Ukraine conflict.

Even, Pakistan has been unable to secure LNG contracts on spot basis due to the highest-ever prices of commodities in the international market. Pakistan LNG Limited – a state run company – had failed to arrange the LNG cargoes even during the last winter season.

Australia had been a major gas exporter. However, as its regulator put curbs on gas exports, further shortage of gas in the global market is expected.

In this situation, Pakistan may not be able to secure contracts for the upcoming winter season. Therefore, the next winter will also be tough for the commuters.

In this situation, the consumers in Punjab will be relying more on petrol and fresh increase in its price will have a negative impact on the life of those using motorcycles and cars in the province, experts added.

POL products prices may be raised by Rs28.44