Elahi wins, but Hamza gets the prize

After a nail-biting climax which appeared as clear as day, the PML-N on Friday won a dramatic victory against the PTI that few had predicted in the Punjab chief minister’s election, retaining the throne of Punjab after surviving its closest brush with loss in the political heartland.

Warmed in the nick of time by a letter from PML-Q head Chaudhry Shujaat Hussain — instructing his MPAs to vote for PML-N’s candidate — Hamza Shehbaz was declared a victor after Punjab Assembly Deputy Speaker Dost Mohammad Mazari ruled that PML-Q members’ votes were not counted in light of party head’s letter.

According to Mazari, Hamza received 179 votes whereas Elahi garnered 176 votes, but only after 10 votes of Elahi’s own party were not counted, which turned the tables in Hamza’s favour. 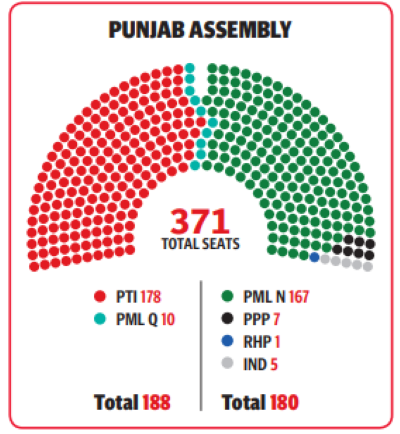 In line with the ruling of the Supreme Court verdict on Article 63-A related to the defection clause, the deputy speaker said he had rejected the votes of PML-Q lawmakers.

Ironically, the apex court’s verdict had served as the legal ground to trigger a second round of elections for the chief minister’s office. In accordance with the recipe ordered by the apex court, the run-off polls took place five days after the by-polls on 20 seats that fell vacant after the disqualification of PTI defectors who voted for Hamza, in a new, reconstituted House with a changed electoral college.

“As party president of PML-Q, I have directed my provincial members to vote for Hamza Shehbaz,” the deputy speaker read the letter received from Shujaat.

However, speaking on the floor of the house, PTI leader Raja Basharat challenged the deputy speaker’s ruling, saying as custodian of the house he could not reject the lawmakers’ votes.

“Chaudhary Shujaat is not authorised to prevent members from voting… he does not have the authority to stop any member,” he said.

Rejecting the objections of the PTI leader, the deputy speaker said he was performing his duties as per the orders of the Supreme Court.

Mazari stressed that the law was “clear” and stated that the directives must be issued by the party leader. At this, Basharat, who was holding a copy of the Constitution in his hand, read out loud Article 63-A(1)(B).

“We had a meeting of the parliamentary party yesterday and it was decided that votes will be cast in favour of Chaudhry Parvez Elahi,” Basharat asserted.

Nonetheless, Mazari said he had spoken to the PML-Q chief over the phone himself and the latter had confirmed the validity of the letter thrice. “He has given the letter as the party chief.”

He said he was simply following SC’s orders. “Go and read the SC’s verdict on defection.”

The deputy speaker proceeded to read out the ruling. “… I hereby disregard and exclude the votes of Chaudhry Parvez Elahi. As a consequence, Hamza Shehbaz Sharif is declared return candidate for the office of chief minister, having received majority votes of members present and voting.”

The session was subsequently prorogued.

The development came about in the wake of alleged behind-the-scenes parleys with political heavyweights, including PPP co-chairman and former president Asif Ali Zardari, swinging into action to make a last-ditch effort to salvage CM Hamza-led provincial government.

PML-Q leader Moonis Elahi later told the media that party president Chaudhry Shujaat Hussain has refused to back the PTI candidate — his cousin Pervez Elahi — for the slot of Punjab chief minister.

“I’ve lost and so has Imran Khan… Zardari has won,” he was quoted by a section of media as saying.

“No video statement has been recorded… I went to meet him [Chaudhry Shujaat] but he refused to record the video,” he said while speaking to a local TV channel.

However, Pervez Elahi in a Twitter post said that in view of Article 63 of the Constitution, there is no importance of Chaudhry Shujaat’s directives to the lawmakers and only the parliamentary leader can issue instructions to the party members.

PML-Q leader Chaudhry Hussain Elahi said in a tweet that all ten provincial assembly lawmakers decided in the parliamentary meeting that Pervez Elahi will be the party’s candidate for Punjab chief minister.

“If deputy speaker does not allow these votes on basis of Ch Shujaat letter he will [be] violating the Constitution of Pakistan and his oath!” he added.

PML-N leader Ataullah Tarar on the other hand termed the letter of the PML-Q parliamentary meeting ‘fake’, saying the election campaign had been going on for weeks “but you held party meeting only yesterday”.

“Legality of this letter side; this is an afterthought. The election campaign was going on since weeks and you held parl[iamnetary] party meeting yesterday??? No news or footage was given? What a shame. Total lies and a fake a letter, typical Moonis Elahi,” he said while responding to Moonis’ tweet.

Pakistan Institute of Legislative Development and Transparency (Pildat) President Ahmed Bilal Mehboob opined that according to Article 63-A (b) of the Constitution, direction to vote for or against a candidate is issued to party legislators by the parliamentary party in a legislature and not by the party head.

“So it is PML-Q parliamentary party in Punjab Assembly which directs its members & not Ch Shujaat,” he wrote on his official Twitter handle.

As the uncertainty surrounded the election of the Punjab chief minister, PTI leader Fawad Chaudhry warned that the situation would get worse if people’s mandate and Supreme Court’s verdict were not respected.

“There is no such despair [among the party leadership]… the people have announced their verdict [in Punjab by-polls]… the decision of the people will be implemented, the procedure should be constitutional… hatred is increasing among the people, uncertainty and anxiety are at an extreme.”

Soon after the contentious ruling was announced, PTI leader Asad Umar tweeted that the party would approach the Supreme Court tonight.

Similarly, PTI chief Imran Khan addressing his supporters via video link urged people to hold peaceful protests across the country against the Punjab Assembly deputy speaker ruling to discard the votes of PML-Q lawmakers in the chief minister election.

“We knew since yesterday that Asif Ali Zardari was playing some game in Lahore and using money to buy the loyalties of the lawmakers,” he said