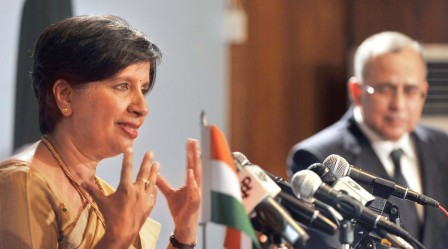 Pakistan and India agreed on Thursday that terrorists must not be allowed to derail the peace process between the two states.

According to officials, both sides engaged in constructive dialogue during their meeting and discussed all issues of mutual concern.

Foreign office officials told The Express Tribune that the meeting was marked by an atmosphere of cordiality and sincerity.

Nirupama Rao agreed that the talks had been constructive and useful in understanding each state’s respective position.

The two sides agreed to work towards restoring confidence and trust with a view to making it possible to have comprehensive, sustained and substantive dialogue.

Rao and Bashir first held one-to-one talks and later joined by delegations from both sides.

Nirupama Rao said they agreed that dialogue is the best way forward. “We owe it to our people to chart out a course for normalization of relations, narrow differences and embark upon a collaborative engagement.”

Salman Bashir said the two countries have been discussing ways and means to mutually cooperate in enhancing anti-terrorism cooperation.

He said that Pakistan and India in principle agreed Thursday not to allow terrorists to derail peace process between the two countries. He said terrorism is an issue of concern for Pakistan, for other countries in the world as it is for India.

Both sides also stressed confidence building measures between the two countries that would narrow the trust deficit.

He said that India is an important neighbour of Pakistan and it would like to have peaceful relations with it. Pakistan and India believe that dialogues are the only way forward, the foreign secretary said.

Nirupama Rao said that both sides should deny terrorists elements, adding that terrorists should not be allowed this time to derail the peace process.

She said that modalities of talks were discussed and hoped that both countries would enter constructive dialogue as the vision is durable peace.

Talks at the ministerial level would be held between Pakistan and India on July 15.

“We want to see prosperous, stable Pakistan in the region,” Rao added. Both sides agreed to take steps for restoration of confidence between the two countries that would pave way for composite dialogue. Both sides agreed that joint efforts for curbing terrorism are needed.

Rao said: “We are going there with a clear-eyed understanding of these difficulties and complexities,” she said.

“I can’t come before you and say that there is a magic formula with which we can solve these problems. We can’t just wave a wand and expect everything to disappear suddenly.

I think we have to be clear-eyed and realistic,” Rao said.

During the call, she conveyed the best wishes of External Affairs Minister S. M. Krishna to the foreign minister who will be undertaking a visit to Islamabad for a meeting with his counterpart scheduled for July 15.

Qureshi emphasised the importance of a cooperative approach in addressing the common challenge of terrorism.